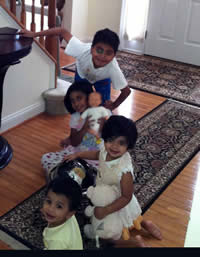 Blessed with two special needs children. As the flight took off from Kuwait International Airport, my wife and I looked at the adorable little fellow snuggled comfortably in the bassinet. We were returning from a month long trip to India after having visited our family with our 9-month old boy, Yusuf. We were glad that we were heading home to US, so we can settle back into our daily routine.
​
We were totally not prepared for what the future had in store for us. About an hour into the flight, my wife noticed that our little one was displaying a strange breathing pattern. We noticed that he was breathing fast and then he suddenly started to cry uncontrollably. My wife took him into her arms and tried to console him but in vain. As his crying slowed down, there was a remarkable slowdown in his breathing as well. Now he was breathing very shallow. The stewardess made an announcement and luckily a doctor, who was travelling to London, came to our rescue. By now Yusuf’s condition had deteriorated rapidly and he had his first (and the only episode) seizure. The doctor immediately conferenced in the crew and explained to them the seriousness of the situation at hand and that the baby needed immediate medical care. The crew was able to get permission to make an emergency landing in Istanbul, Turkey. While all this was going on, my wife and I had lost every hope of saving our son and we were frantically praying with Yusuf unconscious and pale on my wife’s lap.
Picture
In no time our flight descended at the Istanbul airport and we were on the ground with the emergency crew waiting for us. An ambulance whisked us to the hospital. Yusuf was admitted in the Critical Care unit of the International Hospital, Istanbul.

The next hour seemed like the longest hour of our lives as we waited impatiently for a word with the doctors. Finally one of the doctors emerged and updated that Yusuf was very acidic with dangerously low blood sugar and was still unconscious. They would not say whether he would make it or not. And to add to that they would not let us in to see our precious one for full four hours.

Separation anxiety – the height of it – we experienced while waiting outside the CCU. Finally we were let in to see Yusuf. We rushed into the unit and tears flowed down uncontrollably looking at our baby hooked up to all kinds of medical devices and catheters. My wife was surprisingly stronger than me (which I had always known for a fact)… After sitting at his bedside for a few hours, one of the staff members signaled that it was time for us to leave the unit. Half-heartedly we left the unit and headed upstairs to the patient room which was arranged for us by the hospital administration. The next few days were a roller coaster ride; while our son was slowly improving and had regained conscious, the doctors were still not able to get to the diagnosis. All this changed on the sixth day when the doctors took us into the office to break the news. Our son, Yusuf has been diagnosed with a rare form of metabolic disorder called, Methylmalonic Acidemia (MMA). This was based on the lab results that were done by the state of the art labs in Ankara. While the diagnosis was a blessing, the rarity and the non-treatment of the condition left us speechless. It was hard to fathom the future and the prognosis. And I was still in denial.

After having spent twelve days in Istanbul, we were finally allowed to travel back to the US with a medical crew. Yusuf had been stabilized but was on a feeding tube. As soon as we landed in the US, we drove straight to the A. I. Dupont Hospital for Children, Wilmington DE. After multiple tests, the diagnosis was confirmed. A central port and G-tube was surgically placed and Yusuf finally made it home exactly one month since he left our ancestral place in India.

Yusuf is now an adorable boy, who will turn 10 in November. The challenges have been and still are many. From monthly lab work to speech therapies, feeding therapies at Kennedy Krieger Institute, patient studies at the National Institute of Health, Yusuf is now ready to celebrate his 10th birthday on November 18th. He is at a regular school but has had some challenges in terms of coping up with other kids. We are also exploring options for his liver and kidney transplant.

Since then we have been blessed with three other children – two girls, Mariam (6 years – unaffected), Khadija (3 years – MMA Mut 0) and and a boy, Ibrahim (1 year – unaffected). Khadija also goes through the same therapies, dietary restrictions and special formula. She is still struggling to gain height, weight and other development milestones.

Living with two special needs children has definitely changed our lives. Despite all the challenges, our precious kids keep our lives in perspective. Frequent hospital trips and hospital stays has made us enjoy and appreciate small things in life and has made us more thankful for everything. We begin our day with lots of hope and carry on with our chores and try to act just like any other parent in the social gatherings. Throughout the day, we are however constantly reminded of the challenges that our kids face. Keeping our face straight under these circumstances is very difficult but nonetheless it has to be done. Because we cannot let Yusuf and Khadija feel that they are any less abled but rather they are differently abled. And yes, I have made that leap from denial to acceptance.

From the Fall 2012 OAA Newsletter