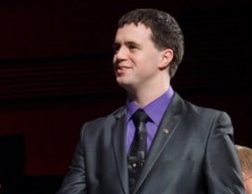 It’s been quite some time since I told my story first, about 5 ½ years. A lot has happened during that time and I would like to talk about the main things.

In the fall of 2006, I went to Reykjavik University, where I started studying mathematics. During the time I spent in the university, I gained some valuable experience which I will remember for the rest of my life. I lived for 3 semesters in student housing with many exchange students from various countries. That was without a doubt one of the best times in my life. There I met many of my best friends and it was very interesting to live in such a multicultural community.

I went few times abroad when I was at the university. In the summer of 2007 I went to Spain to study Spanish for one month with some other students from the university. During the spring semester of 2008 I went on a study trip to Brussels for few days through a course I was taking at that time, called Iceland and the European Union. In Brussels we visited some of the main buildings of the European Union. In the fall of 2008 I went as an exchange student to Torino, Italy, for five months. It was a very interesting experience living abroad for so long time, especially because of the different cultures. Also, since most of the people in Italy don’t speak much English and I didn’t speak much Italian at first that was one of the problems in the beginning. But I didn’t let that stop me, I tried to learn some Italian, at least enough so I could take care of myself.

Last year is one which I won’t forget, especially because of my studies and my disease. In the spring I finally graduated from Reykjavik University with my B.Sc. degree in mathematics. It was great to finally complete this degree. I had been thinking for a while what I should do next, if I should continue with mathematics and go for the master’s degree or if I should switch to a new field. In the fall of 2011 I started a new degree in the University of Iceland, BA in Anthropology. Although there is quite a difference between mathematics and anthropology, the first semester has been very interesting. I haven’t decided where I will work in the future, but maybe I can combine these two areas somehow.

2011 was also an important year related to my disease. Since I was first diagnosed with IVA, I had been taking 5 capsules of Glycine 3 times a day. I’ve also been taking 2 tablets of Carnitor each day, along with some calcium and vitamin. The doctor that has been treating me all these years (he’s a paediatrician, so you can imagine that it can be strange sometimes when I go to see him), said that it would be ok if I would start decreasing the amount of Glycine I take. The main reason for that was because my body had stopped growing, but I would still have to keep on taking the Carnitor. So I started taking 9 capsules a day for a week, then 8 per day for a week, and so on. Finally it came to that day that I took my last capsule of Glycine. It was so strange to stop taking the Glycine, since I had been taking it every day since I was diagnosed at the age of 2. It’s also sort of a relief, because now I just take my medicines twice a day and I don’t have to worry about taking the medicines with me to school. My doctor also told me that I would be ok if I started trying out other food that have higher amounts of protein. So sometimes I eat a hot dog, a hamburger or something else, but I also can feel when I had enough. I can’t eat much chicken and when I had enough meat (or some other high protein food) I can feel it. Maybe it’s my body’s way of saying stop.

I hope that my story has been interesting to someone, and I would of course be glad to help people in any way I can.