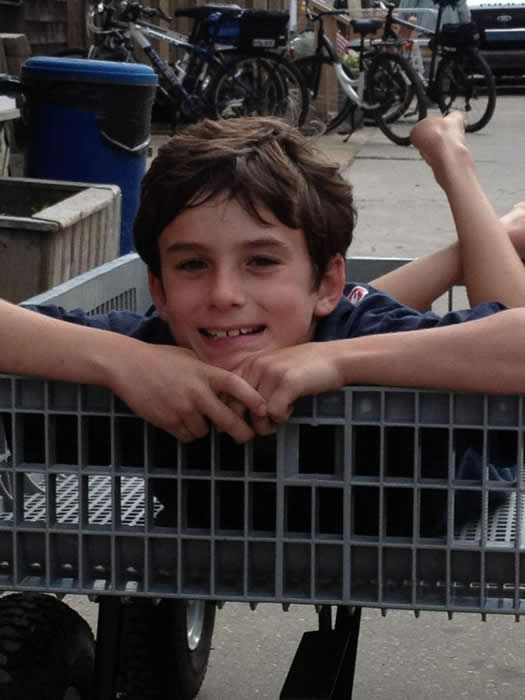 My husband Peter and I live in Long Island, NY.  Our first child Connor was born on October 14, 2001.  He was 7 pounds, 3 ounces and 20 inches long.   He was without a doubt the most beautiful baby I had ever seen.  I could not stop staring at this perfect little baby, with his bald head and big blue eyes staring back at me.  His Apgars were 9/9 and he nursed immediately with no trouble latching on.  All was good for the first 3 days of his life.

Because Connor was born after 10:30 PM, we were allowed to stay an extra day in the hospital.  This extra day was what ended up saving his life!   The morning we were being discharged from the hospital and ready to come home, the pediatrician came in, checked Connor and wrote the discharge papers.  My husband was on his way to come pick us up to bring us home.   I asked the nurse to take Connor back to the nursery so I could finish getting changed and packed up before we left.

Just as my husband arrived to take us home, the doctor came into my room and told me that Connor had a fever and trouble breathing, so they were not sending him home.   The cleaning lady in the nursery was emptying the garbage and noticed that Connor was struggling to breathe.  She immediately got the nurse who called the doctor in.

They initially thought he had meningitis, but the spinal tap was negative.  Before we knew it, an ambulance arrived to transfer him to North Shore University Hospital.  We were not allowed to go in the ambulance with him, and had to follow in our car.  By the time we got there, he was already admitted to the NICU, was on various monitors and had IV’s in both arms.  The doctors told us his condition was critical and they did not think he would survive the night.   They did not know what was wrong with him, only that his labs were off and he had an extremely high ammonia level.  As they were discussing Connor’s lab values and possible causes, a metabolic doctor who was there seeing another baby who had PKU overheard them and started to review Connor’s chart.  He immediately began working Connor up for a metabolic disorder.  Dr. Alfred Slonim became Connor’s doctor and still is almost 11 years later.

The first few days in the NICU were really touch and go.  His labs kept plummeting and we were told at least 5 different times that he was not expected to live, and if he did survive he would be severely handicapped due to the very high ammonia levels.   Connor had a muscle biopsy done and sent off to Canada.   After a few days in the NICU we were told they were going to put him on dialysis.  Then his next ammonia level came back and it was slightly lower than the last one.   Another repeat level showed an even lower level.  They did not put him on dialysis and continued to monitor his labs.

His urine test for organic acids came back at the end of the week and his methylmalonic acid was very high.   He was diagnosed with MMA and we were told about the various types.  We could not believe what we were hearing!  We had to wait 2 days before he could get an injection of  hydroxycobalamin because the hospital didn’t have it and had to order it in from another hospital.  He was given the shot and then we had to wait 3 days to get the results to see if he would respond to the B12.  After what seemed like an eternity, the results came in and Connor was B12 responsive.  He started getting daily injections of B12.

Since this was 2001, the internet was new and not readily available.  I had friends do research on MMA and everything in print was extremely negative.  Whatever we read said that children either died in early infancy or had significant developmental delays and constant hospitalizations.  We were distraught and stressed about what the future would bring.  However, we knew we were lucky that he went into crisis while still in the hospital.  All the doctors have told us that if Connor was home we would not have noticed the signs of his crisis until it was too late and would have probably thought it was SIDS. Connor had every specialist under the sun come and see him – cardiology, orthopedics, neurology.  His EEG was abnormal.  He had bruises and collapsing veins from his IV’s which were in every extremity.  I was unable to feed him but told to pump every 3 hours and freeze the breast milk.  Eventually, Connor’s lab values began to stabilize and improve.   Things were looking up.  After day 10 we were finally able to hold him and start feeding him a bottle with Propimex-1 and ProPhree mixed with breast milk.

We brought him home after 2 weeks and a nurse came to the house and taught me how to do the shots.  Connor was fed every 3 hours round the clock for the first year of his life.  We had to set our alarm in the middle of the night and force feed him the bottle, as he just wanted to sleep all night and had little interest in eating.  After feeding him, I would pump and save the breast milk, then go to sleep before repeating the cycle again an hour and a half later.  Needless to say, I was sleep deprived and delirious, but Connor was growing and doing well.

The first year of his life was definitely the hardest.  Constant appointments, round the clock feedings with a baby who didn’t want to eat, food diaries, and always holding our breath waiting for the weekly lab results.  We also had the worry of negative consequences from the high ammonia levels during his crisis.  Luckily we had a great metabolic doctor and nutritionist who would return our phone calls immediately and answer our questions no matter what time of the day or night.  When Connor got a fever or a stomach bug we would take him to the ER for IV hydration to prevent a crisis.  At first we were given a hard time by the local hospital since they did not know anything about MMA and didn’t understand why we were requesting IV fluids for a baby who was not dehydrated or lethargic.  But Dr. Slonim told us to go no matter what, and looking back I am so glad that we did because Connor has never had another metabolic crisis since his initial one right after birth.  We made it through the first year and Connor met all his milestones on time.  His appetite also improved slightly which made the feedings easier.

When Connor was a year old I found out I was pregnant again.  I was a nervous wreck throughout my pregnancy.  Our second son Aidan was born July 21, 2003 and when he was born we paid to have his blood sample taken and tested for MMA since NY State did not have newborn screening at that time.  He is unaffected.  My daughter Julia was born June 10, 2005.  By then NY had newborn screening and she is also unaffected.

Connor has had his share of childhood illnesses and injuries.  When he was 5 he had appendicitis and had his appendix removed but he remained metabolically stable.  He has had stitches twice from hockey injuries and surgery to repair a broken finger and nail bed. He has also had many ear infections, strep throat, and a few years ago he had the flu.  All of his illnesses were managed from home.

Connor is now almost 11 years old and entering 5th grade in September.  He is an extremely active boy.  He plays ice hockey (and is a fanatical NY Ranger fan).  He also plays lacrosse, soccer, and will be testing for his black belt in karate in October.  Connor does well in school and is very studious, but also loves to socialize with his friends.

He gets the B12 (hydroxycobalamin) shot one time per week and takes Carnitor 4cc, 3 times per day.  He also gets 75 grams of Propimex-2 per day, but we are in discussions to possibly eliminate the Propimex-2 after going to NIH this past spring.  We do not count grams of protein per day but limit his protein intake with a vegetarian diet.  He has a great appetite.  He loves pasta, rice, veggies, pizza with half the cheese taken off, vegetable sushi rolls, and his new favorite – a sandwich with lettuce, tomato, cucumbers and Russian dressing.  Connor would eat junk food all day if we let him and drinks only water unless we let him drink soda.  He definitely prefers salty foods over sweet.  We see Dr. Slonim twice per year now for a metabolic work up.
​
I have wanted to share his story so many times, but never got around to it.  As everyone knows, life is so busy!  I would be happy to talk to anyone in person to share our experiences with MMA.  Please feel free to contact me.

From the Fall 2012 OAA Newsletter