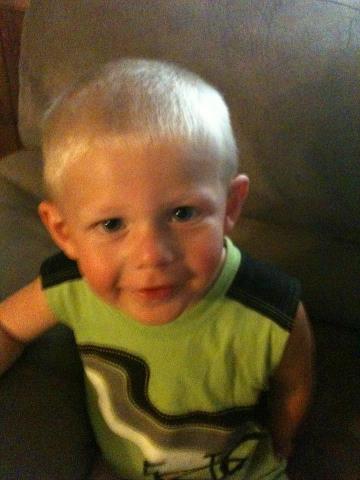 Dylan James was born on June 3, 2009 at 5:59 pm,
1 minute after his twin sister, Mya.  He weighed 4 lbs. 7 oz. and was 16 ¾ inches long. I was so ecstatic to hear they were crying and were perfectly healthy, just small. This pregnancy was rough; contractions started at 24 weeks confining me to bed rest for the remainder. The next 3 months I was in and out of the hospital with contractions until preeclampsia at 37 weeks sent me for an emergency C-section. Mya and Dylan spent no time in the NICU and actually had discharge papers before I did.

A week later, I receive a call from the pediatrician’s office explaining to me that some of Dylan’s newborn screenings came back abnormal and that the pediatrician wanted to see him as soon as possible. We scheduled an appointment and the next morning the pediatrician informed me that my son had an Organic Acidemia disorder and that we needed to do further blood work. I said “An organic what???” I had never heard of such a thing. The amazing thing was that his twin sister, Mya did not have any abnormal newborn screenings.

We did another round of blood work, again same results. The pediatrician advised me to take him to Shands HealthCare in Gainesville to meet with a geneticist. Dylan and I met with his geneticist and genetic dietician. The geneticist gave him the most thorough examination I had ever seen and then went over all of his results with me. He explained the elevations in his urine and blood work were consistent with 3MCC. They were stumped though because his elevations were only 2 to 5 percent higher than normal instead of the 10 to 20 percent elevation they had seen with other 3MCC cases. With this result, we were instructed to do more blood work and urine analysis. Once the blood was drawn, we drove back home and waited for the results.

About two weeks later I received the call that Dylan’s blood work and urine analysis was consistent with the other results and that he should begin taking .75 ml of L-Carnitine twice daily. He was not put on any diet restrictions because studies had been showing that limiting the protein intake in some of the other 3MCC patients was actually making those patients protein deficient. Dylan was on Good Start formula and ate the same foods that his older sisters did. He has always been in the small percentile rank among other children his age for his weight and height, falling in the 3 to 5 percent, but the doctors did not seem concerned by this.

In March 2010, the geneticist took a small piece of Dylan’s skin to grow cells from it so the enzyme levels could be studied. A couple of months later we received a call from the geneticist, and once again he was stumped. Out of the three enzymes studied, all enzyme activity came back within normal limits. Shands HealthCare called the University of San Diego, where the cells had been sent, and asked them how many times had a child with 3MCC had come back with normal enzyme activity. Their response was that out of 300 cases studied; Dylan was one of three that came back with normal enzyme activity. The genetic team dubbed Dylan their “Medical Mystery” because they have not seen any other case like his where elevations were consistent but on a lower level and enzyme activity is normal. Our next step was to do DNA Sequencing on Dylan’s MCCC1 and MCCC2 genes. These are the two genes where mutations can exist, causing the defect and hence giving the term 3MCC.

In August 2010, we received the results and found that Dylan has a mutation on his MCCC1 gene. The mutations are G45E and V439L.   Dylan is still dubbed their “Medical Mystery” because they have never seen this mutation before. The genetic counselor believes that the mutated gene runs in both families for a very long time and that it finally took Dylan’s dad and me to combine them.

Overall Dylan is a healthy three year old. We have been to the emergency room several times, once for pneumonia and all others for unexplained high fevers. The high fevers, the highest being 105.5, always led to a stay in the hospital for a couple of days so he could be monitored while blood work was run. Out of four stays in the hospital, he has only had to be put on dextrose IV once when his sugars dropped below 70. In this instance the geneticist was not too concerned about the drop.

Dylan’s high fevers were not explained with every visit in the hospital. All tests came back normal; he was well hydrated, showed no sign of any bacterial infections, and his sugar levels were always normal. We know that Dylan’s body can tolerate high fevers and knock on wood, have not had any bouts of diarrhea, vomiting, or refusals to eat. We do not know how Dylan’s body will react when he is very ill. I have been instructed to double his dose of Carnitine if he gets sick.

I do not rush Dylan to the doctor or ER every time he has a high fever. I treat him as a normal child until I see something that is not normal with him. That is when I take him to the doctor.

Dylan’s new pediatrician was surprised that Dylan has no mental delay as far as the other 3MCC patients he has seen or read about do. This is not to say that all children with 3MCC will have some type of mental delay.

Dylan is not on any special diet and eats what everyone in the house eats. The only thing that he seems to have in common with other3MCC children is that he is on an L-Carnitine supplement.

I should note though that Dylan did not have his L-Carnitine for a week and |became lethargic and uninterested in his normal activities and at times stared into space. He began taking his L-Carnitine again and all of those symptoms disappeared. I find it very interesting that although there is no medical proof that L-Carnitine helps children with 3MCC, when Dylan does not take it on a daily basis I see signs that he is not acting his normal self. When the supplement is given to him regularly, he is as normal as any other healthy child is.

After many blood tests, enzyme activity studies, and finally DNA sequencing, the official diagnosis is that Dylan has 3MCC. The doctors believe though that he has a very mild case. He sees his geneticist once a year, at which time they do more blood work and go over any concerns and his development. His geneticist is happy with his development so far and that they do not have any reason for concern. There is still so much to learn about 3MCC. Dylan will grow up with a team of doctors and will help aid in the study of 3MCC especially seeing that his case is very different from other 3MCC cases that exist. Nevertheless, for now, Mr. Dylan is as active and healthy as any other boy his age and he keeps his mom on her toes.