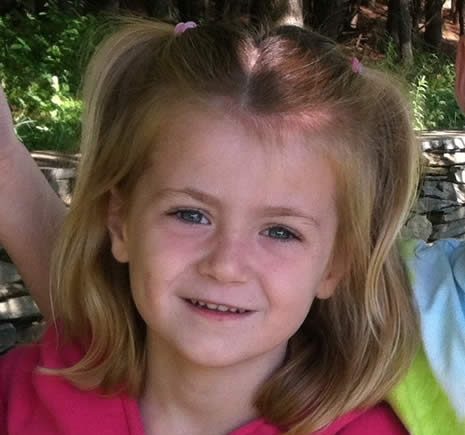 We welcomed Maeve into our family on April 11, 2009, weighing 7 lbs, 2 ounces. She appeared to be perfectly healthy, and my husband and I took her home two days later. Around five weeks old, Maeve was diagnosed with methylmalonic acidemia–thanks to newborn screening. We received the call from Dr. Parton, a metabolic doctor at Stony Brook University Hospital. She recommended that we admit Maeve to the hospital the next day and arrange for someone to stay with our son for a couple of days. (Maeve’s big brother, Owen, was two and a half at the time and unaffected by MMA.) I was beyond upset and confused. It made no sense to me that we should rush to the hospital with our seemingly healthy baby. Dr. Parton explained that we needed to start Maeve on special formula and begin Vitamin B12 injections right away. She was concerned that Maeve could have a metabolic crisis if we waited. In the hospital, Sean and I would learn how to give the injections, and if Maeve wouldn’t drink the formula (she had never been bottle fed), she could get an IV to avoid any risk of dehydration or other side effects.

That first day in the hospital was the hardest day of our lives. I cried on and off the entire day, as doctors, nurses, and medical students came in and out of our room. In between, my husband and I read the big, scary booklet that was given to us about MMA. I was also pumping breast milk because there was a chance I’d be able to continue nursing Maeve at least a little, depending on her MMA levels. They had A LOT of trouble drawing blood from Maeve. Nurses, phlebotomists, and even the NICU nurses poked and prodded Maeve for hours, and were unsuccessful. Maeve screamed and screamed. (I think they were surprised she was so feisty, this tiny baby with such a grave diagnosis.) My husband and I tried to comfort Maeve each time. But by the end of this exhausting ordeal, we just got out of the way and cried along with her. I later learned that Dr. Parton was concerned that the stress of all this could trigger a metabolic crisis. It was now 10:00 PM and we all needed rest, so Dr. Parton asked everyone to leave us alone. Luckily Maeve was drinking the formula, and they were able to draw blood the next morning. Sean and I learned how to do the B12 injections, and we were allowed to go home after two nights.

Dr. Parton was confident that Maeve was B12 responsive because her MMA levels decreased so much when we started the B12 injections. They did the skin biopsy, and eventually the results came back that she had Cobalamin A. This was good news! Things went relatively smoothly the next few months as we learned how to manage Maeve’s MMA. We gave B12 injections every day. Maeve drank her formula willingly, and I continued to nurse for a set number of minutes each day in efforts to estimate how much milk/protein she was getting. We saw Dr. Parton once a month, and adjusted Maeve’s diet depending on the lab results. Her MMA levels were nice and low during this time.

For the first year of Maeve’s life, we were advised not to let her go too long without eating or drinking. We were given one hour for each month of age, i.e. let her sleep for six hours at six months old. It was hard for us to get up in the middle of the night, but even harder to wake a sleeping baby and make her drink a bottle she didn’t want. She was tired, not hungry! Sometimes we were up for two hours trying to get her to drink four ounces of formula.

Around six or seven months old, it became increasingly difficult to get Maeve to drink her formula–day or night. I had stopped nursing by then. It got to the point where she’d only drink one ounce at a time, then stop. There was nothing we could do to get her to drink more. We were so stressed and worried about calories and dehydration and becoming catabolic. We decided to admit Maeve to the hospital to have an NG tube placed. The NG tube was soon replaced with a G-tube and eventually a Mic-key button. This was a difficult decision, but it drastically improved the quality of all our lives. It gave us more time to enjoy both our children (Owen was barely three years old). Before, our days were completely consumed with feeding Maeve. There wasn’t time for much else.

Maeve just didn’t have the appetite or interest in food that other kids have. Even once she was eating some solid food, she didn’t want more than a couple of bites of anything– even ice cream. And if she had a cold–forget it! There was so much mucous, she would gag and vomit easily and often. That has improved drastically over the years, and fortunately Maeve hasn’t had any major illnesses or hospitalizations (other than for feeding and stomach virus). She has never had a metabolic crisis. Knock wood.

Amazingly enough, right around Maeve’s 3rd birthday, something just clicked and she started drinking all her Propimex. Suddenly it tasted good! Suddenly she had an appetite! She gradually started eating more substantial amounts of food. We stopped using the Mic-key button and then had it removed a year later, this past May I’m proud to say, Maeve now eats a wide variety of food, including spinach and asparagus! She eats regular, full-protein food, but I do count and measure the protein in everything she eats. At this time, we give Maeve about 23 grams of protein from food each day, plus 10 ounces of Propimex-1. Our goal with Dr. Parton has been to gradually decrease the amount of formula and increase the protein from regular food in her diet. We still see Dr. Parton and have blood work done once a month, and adjust Maeve’s diet as needed. We’re hopeful, that since she is B-12 responsive, she’ll be able to handle a relatively normal diet someday. I look forward to the day when we can go to a restaurant without bringing a gram scale or our own food for Maeve!

While Maeve has been stable metabolically over the years, we’ve had challenges in other areas. She showed signs early on of both physical and cognitive delays. Maeve began receiving Early Intervention services at home several times a week for PT, OT, and feeding around 8 months old. Speech was added at 18 months old. We were busy. But we were blessed with a group of remarkably patient, dedicated therapists who worked with Maeve through many milestones. We will be forever indebted to these special people. When Maeve turned three, she transitioned to a preschool that provided those services. Maeve is making steady progress in all areas and we expect her to catch up in her own time. She is easily distracted at school, so we hope that attention issues won’t make school more challenging in the years to come.

As of now, Maeve goes to an amazing preschool for four hours a day, where she continues to receive speech, OT, and PT. Maeve is a sweet, silly, smiling-all-the-time girl who loves sports and anything her brother is interested in. She runs, jumps, dribbles a basketball (quite well), and is learning to ride a two-wheeler bike with training wheels.
​
I realize how extremely fortunate we are that Maeve was diagnosed through newborn screening; and to live so close to a hospital with a metabolic doctor who is knowledgeable about MMA. Those factors made the most devastating news easier somehow. At least we knew what we were dealing with. We are so grateful to Dr. Parton and her staff for their constant guidance and support over the last four years.

From the Fall 2013 OAA Newsletter