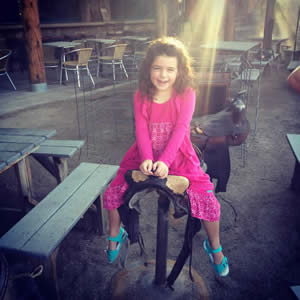 On May 18th, 2006 my husband and I attended our first childbirth class.  We learned that the onset of labor doesn’t happen like it does in the movies, rarely will your water break on its own.  Roughly ten hours later I was awoken from a deep sleep by my water breaking -on its own.  It was five weeks before my due date.

Once I was awake enough to realize what had happened, I was not overly concerned.  I knew that at 35 weeks my baby would likely be just fine. I called my doctor, took a shower and had breakfast and went to the hospital.  I was induced later that morning but never dilated enough for a natural birth.  At 3 am, the doctor woke me up and explained to me that I had a fever and she wasn’t comfortable with waiting any longer, she wanted to perform a C-Section.  I’d had an epidural and my nurse was warm and kind, I wasn’t in pain and I wasn’t at all scared.  Without hesitation I agreed that the C-Section made sense.

At 3:30 am on May 20th, Kendall Joy was born.  After they’d cleaned and swaddled her, one of the nurses brought her around to me for a peek. I remember saying “Ooh, she’s cute!”  Then they whisked her up to the NICU to check that her lungs were fully developed. I told my husband that I wanted him to go with her and stay with her.
​
The next thing I remember after that is waking up in a private room with my father sitting next to me in a chair.  He was reading a newspaper. “So”, he said, “your daughter is a Taurus.”  Oh boy, I thought, this will be interesting!  Later that morning I was able to go up to NICU to hold my baby for the first time.  She was perfect.  And as far as I knew, she was healthy.

I went to the NICU for almost all of Kendall’s feedings.  The nurses kept telling me that she wasn’t drinking quite enough and they’d like to see her take more.  One nurse in particular kept telling me that if Kendall didn’t start drinking more they would have to put her on a feeding tube. Each time she said this to me she made it sound like a threat. She said it one time too many and I cracked.  I asked her not to bring it up again unless the neonatologist had decided it was absolutely necessary and then at that point I would discuss it with him.

I was released before Kendall was because she was jaundiced.  I hated going home without her but my mother assured me that the sleep would be good for me as I recovered from surgery. There would be plenty of sleepless nights when the baby was home.  I believe it was my second evening at home when the neonatologist called me.  He wanted permission to take more blood for the newborn screening lab.  I told him he could have my permission but I wanted to know why they needed more blood.  “She tested positive for a rare genetic illness” he said, “I am not even completely sure what it is.”

I started to sob and my husband took the phone from me.  My mother tried to get an explanation from me but all I could say was, “She’s sick, she’s really sick, she could die.” The doctor had not said that my baby could die, but in my exhausted, hormonal mind, if he’d never even heard of the illness she had, then that was the logical conclusion. I had never been so devastated or so scared.
My husband got the name of the illness from the doctor.  What she had was called 3MCC, they’d run the blood work again to be sure that it wasn’t a false positive and they’d need my blood too.  My husband googled 3MCC and found only the worst case scenarios: brain damage, developmental delays, failure to thrive, it was all horrible.

I insisted on going back to the hospital for the late night feeding that night.  I sat with Kendall in my arms while my husband and mother asked questions, tears were falling from my eyes as I listened.  Then suddenly, Kendall wrapped her tiny hand around my finger and looked at me.  There is no possible way to explain the feeling I had, but I got the distinct impression that she was telling me that everything would be ok.  I’ll never forget it.  I smiled and held her tight, feeling better than I had when I’d gotten there.
The neonatologist put us in touch with a genetic specialist who very kindly called us from her vacation. The state had rushed our blood results and confirmed that Kendall had 3MCC. She told us that her office would get us in as soon as possible but we were not to worry.  She’d seen Kendall’s charts and she was doing well.  She insisted that we were not to read and fear the worst case scenarios.

When we had our appointment, our genetic specialist asked to take my husband’s blood, she wanted to find out if we were both simply unknowing carriers or if he had 3MCC also.  To our surprise he does have it.  He’s been asymptomatic his whole life.  Though now he wonders if it explains why he has difficulty gaining muscle.  I am just a carrier.

Kendall was put on a carnitine supplement to help her body rid of itself of harmful byproducts. Carnitine made Kendall’s stomach upset and as a result she was getting terrible diaper rashes with lesions.  We had consulted a second genetic specialist at Boston Childrens’ Hospital for another opinion on her treatment. The specialist felt that if my husband had been asymptomatic that we could treat Kendall the same way.  She’d done very well so far.  We took her off of the carnitine.

Kendall grew and developed almost completely normally.  She had “sticky” milestones, in fact she didn’t walk until almost 16 months but our pediatrician was not overly concerned. Everything seemed ok but I couldn’t shake a nagging worry that the other shoe was yet to drop.

On the morning of December 29th, 2008, we were staying with my husband’s family for a visit. Kendall was 2 1/2.  My mother-in-law woke me up to say that she thought Kendall was sick.  I went up to check on her and found her dozing on the couch.  When I picked her up she was floppy like a rag doll and her heart was racing. “This isn’t right,” I said, “something is wrong.”  Everyone tried to convince me that she was just tired and fighting something off but I insisted that I was bringing her to the emergency room.

When we got to triage the nurse looked at Kendall slumped over my shoulder and asked if she was diabetic, “No.” I answered.  He was snapping his fingers and calling her name, he hurried another nurse in with a glucometer. Suddenly Kendall was being rushed into the back and the nurse was telling me to follow them.  An entire team had descended upon my child within seconds.  I was terrified.  Her blood glucose was 30. (A healthy non-fasting child will usually have blood sugar readings over 100.)  If I hadn’t insisted upon bringing Kendall to the hospital, she might have gone into a coma.  I was shaking.  The attending doctor was explaining that it was probably just hypoglycemia.  But I wouldn’t listen.  “She has 3MCC, I said, you need to call your genetic specialist and find out what to do, please.” He looked at me like I had 3 heads but he did as I asked.  The specialist had Kendall admitted to treat her for metabolic crisis.  We were never able to determine what had brought it on.

Kendall recovered well. The hospital taught us how to use a glucometer and sent us home with one so that we could keep an eye on her blood sugar.  When we returned to Boston we made an appointment to see the genetic specialist at Childrens’ Hospital.  He put Kendall on a low protein diet and back on carnitine and outlined the conditions under which to bring her to the emergency room in the future.  With this help we were able to avert future potential crises when she had stomach viruses or other normal childhood illnesses.

Today Kendall is a few months shy of seven years old and doing extremely well.  Her current specialist is so happy with her growth and development that we no longer count grams of protein.  She continues to take carnitine.  We have made many emergency room visits over the last seven years but Kendall has never gone into a second metabolic crisis. We consider ourselves incredibly lucky and we are extremely grateful for her continuing health.  I don’t know that I will ever relax completely, but for now, life is very good.