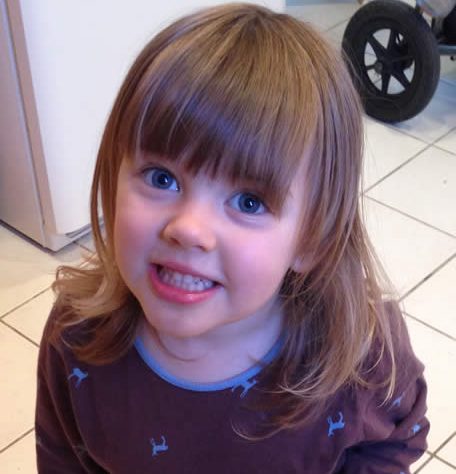 Our first child Poppy was born in November 2009, punctually on her due date. As a resident of California she underwent expanded newborn screening when she was born, but the test came back negative. We proceeded to live the typical life of a family with a new baby, with all the usual joys and hardships, not knowing that Poppy has beta-ketothiolase deficiency (BKT or BKD).

Perhaps because Poppy’s father is a stay at home dad and her exposure to infection was less than it may have been at daycare, she didn’t even get her first cold until she was a year old. We didn’t realize how lucky that was for her yet.

Once when she was about 1 year old she was a little sick and started having very labored breathing. Her dad took her to the pediatrician who dismissed it as perfectly normal, and indeed she got better by the next day. I always felt a bit bothered by that diagnosis, since I had never seen breathing like that before. Now I know that my instinct was right.

​At 17 months old Poppy got the stomach flu. She was lethargic and didn’t want to eat or drink. Her pediatrician recommended pushing fluids, not worrying about how much she ate, and letting her get lots of rest. We had never seen her truly sick, and it was heartbreaking to see her vomiting and enduring severe diarrhea. We held her and pushed Pedialyte and waited for her to get better. On day three she slept three or four hours later than normal; when she woke up she was much worse, refused to eat or drink anything, was entirely non-interactive and clearly suffering. We called the pediatrician and was directed straight to the best pediatric ER in the city.

At the hospital the very alarmed ER doctor told us that Poppy’s bicarb was 3, lower than anything he had ever seen: normal blood bicarbonate levels are 22-26 mEq/L. After two days she had a 13; improved, but not acceptable. When she was admitted she had a blood pH of 7.0. After two days it was up to 7.2, but normal is 7.35-7.45. The doctors said she had metabolic acidosis, at term we had never heard before.

Poppy’s symptoms got better, thanks to lots of IV hydration and medicine, which was a relief. But the doctors still had no idea what was wrong, which was scary. We spent five days in the hospital, three of those in the ICU and two in the pediatric ward. The doctors treated her symptoms and she slowly and steadily got better. After she successfully maintained a healthy blood chemistry for a day off of all medication (except carnitine) the doctors sent us home. When she was discharged, on Mother’s Day, she was back to her usual cheerful energetic self.

Poppy seemed in high spirits, so we were relieved. We were told that a pediatric metabolism specialist at UCSF had been consulting with Poppy’s ICU doctor. We knew we’d be contacted to have one or more follow up visits with that specialist. We knew it could take months to discover what happened, or that we may never know

Just 9 days later we get a call from UCSF with a diagnosis of beta ketothiolase deficiency.  Knowledge is power, and so we sprang into action. The specialist medical team we are working with have been so supportive, knowledgeable, kind, and energetic. Our first meeting with them last at least two hours, and afterwards we felt like we had a good handle on what we have to do to give Poppy the best chance at avoiding another hospitalization. Her prognosis is very good, now that we know what happened.

We’re happy to report that today, at 3.5 years old; she’s avoided both the hospital and another metabolic crisis through careful diet and ketone measurement. She takes carnitine daily, gets blood draws four times a year, and follow ups with her metabolic team twice a year. Together with her doctors we’ve found a daily protein level that works well for her and isn’t too restrictive, and she hasn’t suffered any ill effects from her one metabolic episode.

We briefly debated our plan to have a second child, and quickly decided to go ahead. When I became pregnant with our son Lincoln we opted not to get an amniocentesis so we didn’t know until birth if he was affected. Poppy’s metabolic team and our pediatrician ordered an extensive panel of tests to ensure that we would not rely on newborn screening this time!

Lincoln was born in April 2012 and endured four blood draws in his first two weeks of life. After a few more weeks of waiting and waiting for the results to get back, he was pronounced not affected by beta ketothiolase deficiency. The doctor’s exact words were that it is “extremely unlikely (as close to 100% as we can get).”

Today we are looking forward to Poppy starting preschool in the fall. We know she’ll slowly start to realize that she has dietary restrictions that other children do not, and are trying to prepare for it without making it a big deal. Still, I’m very anxious about her starting school and being free to make her own eating choices, and not understanding how important those choices are.

The OAA website and email list is a great resource for when I needed someone to talk to, when I want to reach out to someone who has walked this path before me, and when I need to learn about Poppy’s disorder.

From the Summer 2013 OAA Newsletter