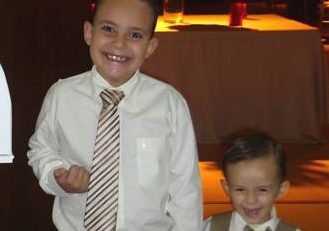 Our journey started when I was a few weeks from delivering my second daughter. My doctor started saying that the baby was measuring a little smaller than she should. Of course, her measurements were always borderline by the ultrasound so we did not plan for an induction. However, I was so worried about my baby having intra-uterine growth retardation that I went and read everything I shouldn’t have from all of my books from nursing school. This of course, only made me worry more. Now looking back, I had much need to worry but for a different reason. A few days passed my due date, I was walking into work, which is also the labor and delivery unit, and wouldn’t you know, that as soon as I open the doors to the unit, my water broke. Well, 26 hours later, on November 26, 2002, at 12:36 pm, Ayla Elizabeth was born.

By a couple of hours after birth, she had a pretty significant sounding heart murmer that the pediatrician said was benign. It did go away by the next day. At about 18 hours after birth, breast-feeding started to not go so well. She would go on the breast like she was starving but then come off. She seemed frantically hungry but wouldn’t stay latched. She had also started a slight grunt while exhaling that morning. I had the other nurses and even the pediatrician take a look but no one thought anything of it. At 24 hours of life, we were discharged from the hospital. With Thanksgiving being the next day, we were ready to get home and have some good times with the family and plenty of food.

Well, like with the rest of the stories, the breastfeeding got worse. She would act like she was starving but not latch on. We ended up giving her some formula with a syringe just to make sure she got some. Her grunting was a little worse so I held her in bed that night so I could keep a close watch on her. I awoke the next morning from a terrible dream where a friend of mine, who is a nursery nurse, looked over Ayla and told me to call 911 and get her to the hospital right away. Upon awaking, I noticed her grunting was much worse and she wouldn’t eat. In fact she had started retracting a little bit, which is a sign of respiratory distress like the grunting. I called over a friend of mine in the neighborhood (also a nurse) and she agreed that we should take her in. She said her kids had the same symptoms with RSV as babies.

By the time we got to the clinic on Thanksgiving morning, at almost 48 hours of age for Ayla, her temperature was 94 degrees. Now she was getting pretty lethargic also. An ambulance took us to the hospital where she was put in the NICU. It was not long after that, maybe a few hours, when the doctor looking over Ayla told us he thought this was a metabolic disorder and that he had the metabolic doctor in with her at that time. The doctor said he had just read an article over this type of thing about a month before to refresh his memory, and while the symptoms were similar, he wasn’t sure if that was the case. He was airing on the side of caution, and while he was having the metabolic doctor consult on Ayla, he was also treating her for any type of infection.

Dr Freedenberg, the geneticist, went over a million questions with us. We couldn’t get a definite answer out of her or anyone for a while, which was so frustrating. The decision was to transfer Ayla to the Children’s hospital where they had dialysis machines just in case she needed it for her high ammonia levels. They also had a sort of experimental medication there that they used for lowering ammonia.

Once at Children’s, she was put into the PICU where she stayed most of the time. On December 3, we were finally so frustrated about not having anyone tell us for sure what Ayla had and what the prognosis would be that we threw a fit with the staff. Finally, an attending came in to talk with us but it was right after my husband had left for a breather.  The doctor went ahead and told my mom and me that it is more than likely the worst type of MMA, which is mut 0, in which the kids live about 2-4 years of age. While we wouldn’t know 100% for sure until the skin biopsy came back, they were pretty certain this was the case. I think hearing this and then having to tell my husband when he got back was the hardest thing I have ever done.

Luckily, my family and friends were always supportive and the metabolic doctor tried to reassure us that each case is different and that the information from the books is old. So, after three weeks of being in the hospital, we went home to try and figure out how to get back to living.

The first 9 months were hospital free. After she reached 9 months of age, 2 hospital stays a month began. We were in on her birthday, my birthday, got out just in time for Christmas and went back in before New Years. We made the decision to put in a port-a-cath because she was such a hard stick. Too many times she would decompensate in the ER just trying to start an I.V. After 3 bouts of blood infections with gram-negative bacteria (bad stuff!), we took that port out and put in another one and threw in a g-tube also. The g-tube has been wonderful and I can’t remember trying to get along without it. The port, though risky with infection, has been a life-saver for Ayla I’m sure.

We have had problems with growing but her human growth hormone level is actually high.  This means that her body is trying to grow. It’s likely due to her being acidotic much of the time. We have been able to attend NIH twice now and we are very grateful for everything we have learned. We are also very appreciative of any new updated information that Dr Venditti can provide us and other families. As of now, it looks like her kidneys are okay. We have not been able to do a 24 hour urine which would tell us more but her labs overall are okay. Her physical development is a little behind but with all of the hospital stays, I am not surprised. Her verbal is also a little behind but once again, I am not surprised. She still gets sick a lot but we can manage much of it at home. This is a good thing being that we did not have a metabolic doctor in Austin for quite a while. While we miss Dr Freedenberg, we are happy to have Dr Matalon who is doing a satellite clinic from Galveston Texas once a month starting this last June. He has been very persistent and aggressive at treating Ayla, which is what she needs. He has us do follow up labs and has the nurse call us regularly to check in on Ayla. We feel very well taken care of.

We are very blessed in our journey to have met so many wonderful people. All of the people where I work, all of my neighbors, most of the people at Children’s hospital, and now we can add all of the people we have been able to meet at NIH and at the OAA conference.  Luckily, my family is very supportive and has been a much needed strength in our lives. I have seen the presence of a higher power more times than not and have experienced and felt things that couldn’t be explained. Ayla is a true miracle in our lives and she and her older sister Hailey bring so much happiness and love into each day. I do not know what the future holds for us, but the one thing I know is, we will enjoy today for all it is worth, and for all we have in love and in life, which is more than I ever could have asked for.
​
Melanie
From the Summer 2006 OAA Newsletter