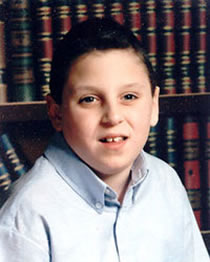 Vince’s story began on February 19, 1997, some of you may have read the article on him about seven years ago. For those of you who didn’t, I’ll go ahead and reintroduce him. He was born in respiratory distress and the doctors caught onto the fact that he had MMA mut-0 way before he got really sick. They immediately started to treat him and avoided any major episodes. I’d like to say we lived happy and healthily ever after but unfortunately we didn’t. Vince was sicker than most kids with MMA, he’s never been able to go to school, caught a slight bug and ended up in the hospital, got excited and he would get sick. The truth is that he has struggled with his health since day one. Despite all the hard times he has added so much joy and love into our lives and has brought a new perspective and understanding of people in general. He has taught us to let life live and to set our lives by the old adage “don’t sweat the small stuff”.

Throughout his 9 years his MMA levels have been extremely high and we have tried everything to lower them to no avail. His kidneys started on a downward slope over the past 6 years and just continued that way until this summer when they stopped functioning properly all together. In July, we thought he had the flu when we found out that indeed it was his kidneys failing. Our docs called and told us we needed to start dialysis and had to get a hemodialysis catheter placed immediately. We went in on a Monday and had dialysis the following day. During this earth shattering experience and loss of hope we met with our metabolic doctor Johan Van Hove who told us that we could start to hope again. He explained that there are a few doctors who are treating MMA kids by removing the entire liver and the possibilities that can arise from the procedure. We felt that hope was returning and that we had no choice but to try it. The problem was that they nor we felt comfortable doing it back home in Denver. We had to go to the center where they had transplanted combined kidney and liver in two other patients with MMA, Stanford Medical Center. So we met with the docs at Stanford and decided to go ahead with the procedure. We were devastated to find out that he needed a cadaver donor and could not use one of us, we were overwhelmed with the fact that someone would need to die to save him. I don’t think that we will ever get over the thoughts that go through our heads when we really stop to think about it. I can only say that we never wanted anyone to die and have only prayed for the best for the family of the donor.

We went on the waiting list November 29th, the waiting was painful but preparations were in order so we went into a robotic mode. On December 29th we went to a higher status and became number one on the waiting list. We prepared with work, school and insurance issues. On January 15th 2006, we received the call at 5:55 am. We immediately knew who it was. We hopped the next flight which was delayed by half an hour just for us. We arrived at Palo Alto at 10:30 and started the procedure. The fear was overwhelming and at times I just wanted to shout, “stop!” We started a 4-hour dialysis treatment and waited for the organs to arrive. Finally after a long sleepless night of waiting Vince went into surgery at 6:00 am Sunday January 15th, a day I will describe as one of the saddest yet happiest days of my life. The day seemed endless, we knew that 12 hours of surgery would but the wait was almost unbearable. Finally the first doctor came out and the liver was placed, he explained that it was a perfect fit, which is a good thing since they didn’t have to cut down the liver at all. However, the spleen ruptured at the time they clamped his old liver and they tried to save it but could not. Another couple of hours and finally Dr. Conception and Dr. Benoit came to us and told us it was over, things went well. The kidney was placed and functioning. Thank God!

The surgery was a huge success and Vince was recovering at record speed. The nurses and the doctors all said that they couldn’t believe how fast things were moving along. After a week he was so well that they moved him up to the third floor to recover. Things were going great and then the crushing pain began. Vince was crying out in excruciating pain for two days before the doctors discovered that his hematocrit was dropping quickly and it must be because he is bleeding internally. An MRI showed that he was bleeding out from somewhere in the abdominally area and it needed to be stopped immediately. Emergency surgery was necessary at that time and the fear started all over again. Later to find out that this is fairly common after liver transplants. Vince’s second surgery was only about an hour long and was very successful. He began recovering again and was transferred back up to the third floor after three days.

One afternoon were enjoying Vince and how well he was recovering while the doctors were telling us only a couple more days before we would go home, we had yet another scare. Vince had a grand mal seizure out of the blue, he stopped and then he started another one. He was immediately sedated and sent to have a cat scan to check for a stroke or any other abnormality of the brain. During the cat scan he began another seizure and was sedated even more. They transferred him back to the room to review the results from the CT, he began another seizure and this time decided to stop breathing. They rushed him to the ICU and immediately began working on him. This day is the most devastating time of my life and I still have nightmares from it. They yelled at him to respond to them and he wouldn’t. We had three ICU doctors, the head of the ICU, two surgeons and many nurses working on him. As I looked into the room at him lying there lifeless, I asked if he was dead, no one answered me yet. You know things are bad when the chaplain is paged and he is sitting next to you. We prayed and prayed for things to be ok but still weren’t sure if they were. Finally, doctors started to sigh a little and started to leave, they had saved him. However, we still didn’t know to what degree. The neurologists were called and couldn’t give us answers; they just had no idea if he would wake up or not. His fragile life laid in the hands of God now we had no control anymore. They hooked him up to the eeg machines and let him be, he would not respond to anything including pain. Aaron and I were completely exhausted and overwhelmed so we took shifts to sleep. At 2:30 am Aaron woke me up and told me that my little boy was asking for his mommy. It was truly the happiest day of my life he was back. Once again, Thank God! He made a full recovery although the doctors still admit that they were pretty scared! We found out that the seizures were probably from a high level of immune suppressant drug called prograf. His level had been high the day before but we still don’t know for certain so we still have him on keppra for the seizures. One good thing we found out is that his brain is that of a normal 9-year-old boy, something I can’t say we expected.

So now, we are still very much in the recovery process. Everyday seems to get a bit easier as we face new challenges. Vince is definitely happier and we have noticed major changes in him. He seems so alive. Our prayers continue to go out to the donor family and we thank them in our hearts every time we look at Vince.

God bless you all !
Lori and family

Point-of-Care Ammonia Monitoring from a Single Drop of Blood