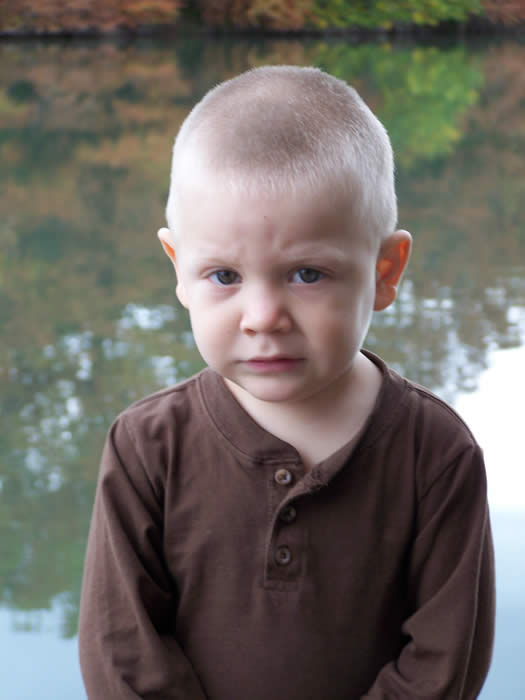 Before giving birth to Sapien I had the most amazing, dreamy, perfect birth plan one could imagine.  No interventions, no medication, Bradley method classes, hired a Doula.  Well…long labor, difficult head presentation, 3 hours of pushing, an epidural, and one C-section later came our little (9lbs, 1oz) boy.  All was well with him for the first 12 hours or so.  Then a nurse thought he had an irregular breathing pattern, nothing to worry about, but something to observe at the NICU.  He was found to have an unnamed infection and was given routine 7 days antibiotics and sent home.  Fast forward to exactly 1 month before his 2nd birthday, June 30, 2008.  That weekend he appeared a little tired, but nothing out of the ordinary.  We even spent Saturday at a festival, swam in the river, and played.  Sunday evening he was laying on the floor acting tired and we periodically noticed some irregular breathing.  Since it wasn’t consistent and it was bedtime we put him to sleep and decided to call the doctor in the morning if we continued to notice anything out of the ordinary.  It wasn’t until about 11am on Monday that I noticed more labored breathing and took him to the ER.  After many tests they didn’t have anything definitive.  Once the evening rolled around his breathing became more labored and it was decided that he would be transferred to San Antonio’s Methodist Children’s Hospital (1 hour away) for more intensive care.  I know so many of you can understand the emotional rollercoaster of seeing your child unresponsive when a needle draws blood gases every 2 hours, constant IVs, doctors asking if Sapien got into any toxic chemicals (hoping this would be the case so we could finally know the cause), neurologists explaining MRIs, and genetic doctors asking if I was a vegan, related to my husband, and did Sapien smell sweet like maple syrup.

During this time Sapien had a metabolic stroke and this was apparent in his MRI.  After every test imaginable they had a diagnosis on Thursday afternoon.  There was incredible relief when the results from Houston arrived.  It was Methylmalonic Acidemia.  Methyl what?  Its funny looking back and having relief as the primary emotion.  When there is an incredible void of information it’s easy to grasp on to something definitive and move forward.  Of course my husband and I soaked ourselves in Google searches and went on the next rollercoaster.  My primary job was to get Sapien though the next 6 days of hospitalization and remain calm during the blood transfusion, learn to give him B12 injections, and laugh when the dietitian said I had to give him “this much” Propimex everyday.  ​​
Since that time Sapien has had one hospitalization (2 months after the first one) which was likely due to his decision to not eat much while battling a virus.  He received fluids and antibiotics and was out in 2 days.  Thank goodness for the sick day formula (double the Propimex-2 and add Polycose) which we enact each time he shows an elevated ketone level.  We test him for ketones about every week when he is feeling well and several times a day when he is sick.  We have a wonderful team in Austin (2 hours away) that consists of his metabolic geneticist, dietitian, social worker, and genetic counselor.  The ease in communicating with them via email has been calming and allows us to touch base between visits.

As you read above, Sapien’s onset was later than most.  Also, the state of Texas didn’t start their expanded newborn screening until January 1, 2007, six months after his metabolic crisis.  We still aren’t sure why the onset happened when it did.  We theorized that since he was exclusively breastfed for so long it wasn’t until foods high in protein were introduced that his body began to show symptoms.  We also wonder if his week in the NICU at birth was due to his MMA, but only showing mild symptoms.  From what I understand, the IV fluids and antibiotics that he received would have been the bulk of the protocol if they knew it was MMA.   He did show some irregular breathing, but nurses tell me newborns go through this stage since they are so longer breathing in amniotic fluid.  Perhaps we’ll never know, but I am in awe and gratitude for all the OAA parents who worked so tirelessly to have the remaining states expand their newborn screening, hoping to bypass a metabolic crisis as the avenue for finding out one has MMA.

Sapien was referred to ECI (Early Childhood Intervention) once out of the hospital.  ECI had a team of a case manager, PTs, OTs, speech therapists, and a dietitian.  After the initial evaluation it was decided that he didn’t need any regular services except for the case manager checking in on us.  Sapien recovered amazingly well from the stroke and regained much of his muscle strength.  We make sure he is often moving, climbing, and maneuvering through the playgrounds, gymnastics, and often with higher functioning kids so he can rise to their level.  His muscle tone needs some strengthening, he is working on the concept of jumping- but overall he is an active and mobile toddler.

Sapien’s MMA is managed with Propimex-2, carnitine, and Bicitra.  He is allowed 13 grams of protein per day.  Up until last month it was always a challenge to get that much food in him.  I’m beginning to rely on popcorn shrimp or ice cream at the end of the day when he needs a few more grams.  He primarily eats fruits and vegetables and is beginning to like sweets.  I’m sure there will come a time when I will have to start limiting his food and using low-protein products but now the issue is how to get him excited about eating anything besides McDonald’s french fries.

Sapien has adjusted much better than his parents to the MMA diagnosis.  He goes on about his happy life, exploring, playing, and testing limits.  We, on the other hand, are on a constant journey of letting go of expectations, inviting the diagnosis in as another family member, and allowing it to integrate into our lives.  I often remind myself that Sapien’s current situation is on the better half of the MMA spectrum since he has a the Cobalamin A mutation.  I also live with the knowledge that feeding tubes, hospitalizations, transplants, cognitive disabilities, and other possibilities could be on the horizon.  I am grateful to our neurologist who gently shared with me this bit of wisdom in the hospital: With a healthy baby, mothers often gaze at their child thinking only of the moment.  When a diagnosis like MMA is made, mothers will often shift to thinking about the future and all the cans and cant’s.  He encouraged me to remain in the present for Sapien’s sake.  To enjoy these moments.  I often call upon his words with tears as I know he is right and regain my footing to join my Sapien in his present delights and discoveries. We are keenly aware that Sapien’s health can deteriorate quicker than most, but we try to take this understanding and remember that, as William Ross Wallace said, “every man dies- but not every man lives.”  The MMA diagnosis keeps our lives in perspective and we are always aiming to truly live, truly laugh, and deeply love with our precious son.