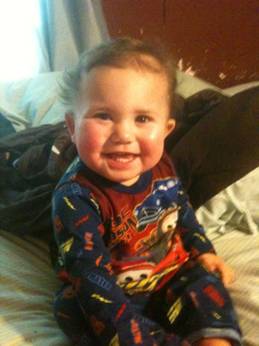 People joked when I was pregnant that by naming my son Max Danger, I would be in for a lot of trips to the hospital. Of course they meant for broken bones and needing stitches.

Maximus Daynjer was born on May 22, 2009. He was a small but healthy 5 lbs 6 oz. He was 3 weeks early but showed no signs at birth of any health problems. Maximus took to breast feeding perfectly. He was awake, aware and seemed perfect.

When Maximus was 2 days old he started showing signs of temperature instability. He would quickly drop to 95 or 96 degrees whenever taken out from under the warmer. The doctors just attributed this to his low birth weight. Then Maximus stopped nursing. He would latch on but not suck. The lack of nutrients going in and the temperature instability caused enough concern that the neonatologist decided to place Maximus in the NICU for observation. Days 4 and 5 of his life brought no improvement. A NG tube was put into place to guarantee that we could deliver food. Then we started to see the signs of residuals. 3, 4, 5, hours after a feeding his belly was still full and the milk showed no signs of digestion. Max was dropping weight quickly at this point and was down to 4lbs. He was very lethargic and stopped responding to noise or touch.

Unfortunately I had been in this very place before. In 2001, I had a daughter named Audriey. I watched over a 13 day period in the very same NICU, her waste away and die. There was no clear cause. The doctors had no explanation. So as I watched Maximus mirror Audriey I became frantic. I told the doctor that I wanted every test done that could possibly be done. The doctor told me they believed in a mother’s intuition and began a series of blood tests. Within a few hours it became clear that this was not simply “low birth weight”. Maximus had an ammonia level of over 900. I was told that newborn screening was taking longer than expected to get back the results. The doctor told me that he was 100% sure it was a metabolic condition, but he did not know yet if it was compatible with life. My heart dropped.

When Maximus was 5 days old he slipped into a coma. The neonatologist consulted genetics doctors in Houston and New Orleans and made the choice to have Maximus airlifted to Tulane hospital in New Orleans. We were given the chance to hold him because they were not sure if he would survive the flight. As a family we stood together and said a prayer that Maximus would be strong and that we would be strong for him.  The minister said amen, and the neonatologist walked up at that moment and said “I have his newborn screening, its methyl-malonic acidemia. It is compatible with life”. For the first time we had hope that Maximus could survive.

After arriving at Tulane hospital Maximus was taken into surgery and a dialysis catheter was put into place. At this point he had an ammonia level over a thousand, so we were told that that time was of the utmost importance. After 4 unsuccessful attempts to begin dialyzing Max, the doctors at Tulane decided that they could do nothing to help him. They told us that they had decided to transfer Max to New Orleans Children’s Hospital. We were so scared. All we could think was more time wasted as he was put into an ambulance.

Upon arriving at Children’s, Maximus was rushed into dialysis immediately. No wasted time, no paperwork. Within 30 minutes, he was on CVVH. When he arrived they drew another ammonia. At its peak, Maximus had an ammonia level of 1300. After an hour of dialysis they told us that his ammonia level was 133. We asked if the original 1300 was a mistake and we were told that they thought that at first, but the lab ran it twice to be sure. When we asked how it could have changed so drastically in such a short time they told us “Some things just can’t be explained”.

After 3 hours on CVVH Maximus was switched to continual dialysis and transferred to the PICU. There Maximus continued to improve over the next few hours. The doctors told us that they were confident that they could turn off dialysis and remove the breathing tube. We sat down in the waiting room to eat for the first time in days. Moments later a nurse ran in and said “I need Max’s mom and dad. He has taken a turn for the worst”.

After turning off the dialysis and being extubated, Maximus began to bleed from his nose and mouth. A clot had formed on the dialysis catheter and blocked blood flow to his right side. The pressure caused his lungs to fill with blood. At 6 days old Maximus was a full code. They revived him, but we were told they did not know how much damage was done. The plan was to give large doses of blood thinner to break up the clot. Because of fear that the clot would break loose and be pulled into his heart or lungs, Max would need to be put in a coma to assure the clot would not be jolted free. Unfortunately the large doses of blood thinner made Max’s brain bleed and his ventricles filled with blood.  If we treated the blood clot we made the brain bleed worse and visa versa. There was a lot of time spent just waiting on tests, CAT scans, ECGs, EKGs, ultrasounds, and blood work. Three weeks later Max was brought out of his coma and he opened his eyes for the first time since 4 days old.

Maximus began to try to cry and move around. We were able to hold him and try to feed him. The blood in his ventricles was not breaking down very quickly though. The Neurosurgeons were called in and they confirmed that Maximus had hydro-cephalus. Now every three days a ventricular tap was done to remove the extra fluid from his brain and relieve the pressure.  Maximus’s head would swell and he would not sleep or hold down any food. We were told that this is common for a child with hydrocephalus before they have a shunt placed. This went on for several weeks. It came to a point where Maximus was not keeping any food d own and his blood levels began to fluctuate. While our focus had been on his head, a blockage had formed in his transverse colon. Maximus began to crash. On the X-rays there was no clear picture of what was wrong. So Max was prepped for emergency exploratory surgery. 5 hours of surgery later they found and corrected the problem. But now on top of the mounting concern over his inter cranial pressure we were battling sepsis and a new ostomy. Max faired pretty well over the next few weeks recovering from the intestinal surgery. We were still having ventricular taps every few days waiting for the protein levels in the CSF to come down enough to facilitate the placement of a shunt. When Max was 2 months old they were able to place a ventriculo-atrial shunt. For once, everything went according to plan. At the beginning of August we were told that we could bring our baby home for the first time.

We lived on the opposite side of Louisiana from Children’s hospital. The first few months home involved a lot of trips back and forth to New Orleans. We had shunt issues more than anything.  Maximus never started feeding from a bottle and we just became accustomed to everything being covered in poop because of the ostomy. It was not glamorous or even fun. But Max was alive and growing. In December Max was brought into surgery again, but this was planned and anticipated. He had grown and thrived so well in those few months home that they were able to reverse the ostomy and put into place a g-tube. Everything went great and we were home by Christmas. Over the next several months things just became level and great. In February of this year Maximus got his first stomach virus and had to be hospitalized for 2 weeks. But other than checkups every few weeks we have not been hospitalized.

In March Max began physical and speech therapy. He had a lot of weakness in his right side due to the stroke in May 09, and was not able to control his head or arms well. At our first session of PT I didn’t really have many expectations. Max was far beyond developmentally delayed. Speech therapy was more frightening than anything. It seemed all they did was gag him the whole time. But over the last several months we have watched Maximus do amazing things.

Today Maximus is 19 months old. He cannot walk yet, but he is very close. He wears braces on his legs to help with ankle support. We are confident that it is just a matter of time. Max still does not eat anything by mouth. Speech therapy is a lot slower progress than we would like. But he has proved time and time again that he should never be underestimated. For the first time ever last week, Maximus took a bite off a cookie, chewed it, and swallowed it!! That is what is so amazing about children like Max. He has taught us how to see the little things that matter. When he was at his worst, I made a promise to him and myself that until Max gave up, I wouldn’t give up. Maximus is our gladiator. He is always happy, always smiling, and through the hard work and determination of lots of people, always trying to pull everything out of the cabinets. Thank you to everyone who has been there along the way.