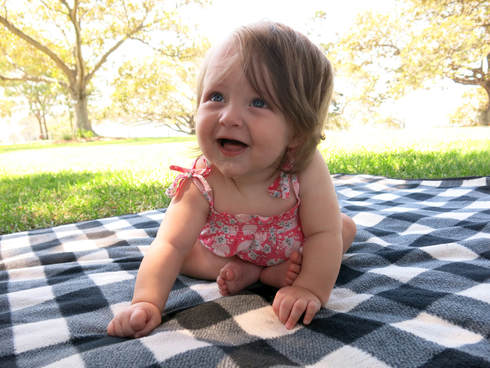 Lana was born on the 18th June 2014, exactly on her due date and weighing a healthy 3.4 kg. I had a good pregnancy and a great birth experience. Seemingly healthy and doing well, we were told we could take our baby girl home when she was 2 days old. A nurse would come out to check on us the following day.
​
It seemed to happen in the blink of an eye. It was our first morning home and suddenly Lana was increasingly agitated. As we were trying to settle her, the nurse arrived; she took one look at her and told us she felt something wasn’t right. We didn’t understand what she meant because moments before she seemed OK waking from a nap. Her colour was not good and we were told to get her to the hospital immediately. Within the next 5 minutes Lana changed from a crying baby to a very still one, limp and lifeless; staring into space with a look that made my heart stop. I couldn’t breathe and was shaking. I thought is this really happening?
​
On arrival at the hospital, she was rushed to a bed where a team of Doctors crowded her tiny body, hooking her up to monitoring machines and putting in an umbilical and central line. Covered in cords and surrounded by machines, the Doctors told us they were testing her for everything possible as they had no clue, at this stage, what was wrong. We had no idea of the scale of her sickness until the head nurse told us we that we had a very sick baby and to be prepared that we might lose her. We were shocked and devastated. These were the first of many tears as over the next 10 days our beautiful Lana fought for her life.
By that afternoon, they had discovered dangerously high levels of acid in her blood, which is a sign that this was a metabolic case. The specialists at the Children’s hospital at Westmead were contacted and we were transferred, the following day, to the Grace NICU.

The task was to now figure out which metabolic disorder Lana had. Luckily for us the Professor in charge, Dr Ian Alexander, was on duty and called in his team of pathologists, on a Sunday night, to start the analysis. By the morning, they had discovered that Lana had a very rare metabolic disorder, called Malonic Aciduria. There are only 30 cases ever recorded in the world. Hearing this news was heartbreaking and we broke down in the room filled with Doctors and Nurses who were all treating Lana. I won’t forget looking up at the nurses seeing the tears in their eyes and the looks of sadness on everyone’s faces. They didn’t know much about this disorder and the future was unknown. At this point, Lana was in a very bad way.

Malonic aciduria (MA) is a condition that prevents the body from converting long chain fats into energy. This means she cannot eat food that contains long chain fat and she cannot fast as we contain long chain fat in our bodies that we break down when fasting. If she were to do any of these things the acid levels would build up in her blood again and attack her organs causing acidosis and she would go into a catatonic state, as she did on her 3rd day of life. Other symptoms of MA can be hypotonia, hyperglycemia, seizures, development delay and vomiting, as well as cardiomyopathy, which she was already experiencing. They said MA children can also be small in stature and low in weight.

The next 10 days in NICU were a blur of test after test. Every day there were ups and downs, good news then bad news. We were told that she was the sickest baby here and that her chances of survival were low. We could not believe that we could lose our beautiful baby girl. Sitting by her side hour after hour, day after day, I tried to stay as positive as I could for her. I visualised her at Christmas time, 6 months old, swimming in my sister’s pool with our family.  I hoped this day would come for us all.

There was a range of problems that Lana was facing due to the acid build up in her blood. Her organs were attacked, in particular her tiny heart, which was now pumping over an inch out of her chest and struggling to work. She was diagnosed with cardiomyopathy and suffered a number of SVTs. There were also concerns she may have brain damage and the acid levels in her blood were still extremely high. We were told this needed to reduce quickly to give her heart a chance to recover. She was placed on a ventilator to give her heart the help it so desperately needed.

After about 7 days, we were receiving more good news than bad. She was on very serious medications and they were being reduced every day and slowly the acid levels were dropping until finally she was in the safe range. Our next hurdle was to slowly take the ventilator off and see if she could pump her heart on her own. This was the hardest. I remember our Doctor saying that they would slowly wean her off the machine as she needed to start pumping her heart herself.  I asked “What if she doesn’t?” he just looked at us. “Well”, he said “Then that’s the end”…. It was surreal to hear someone talking so matter-of-factly about whether your child will live or die. We always wanted honesty, to know exactly what was happening to Lana, however difficult it was to digest but to be facing this when this was meant to be one of the happiest times of our lives was soul destroying.

Over that afternoon and evening she was slowly taken off the machines and our little miracle baby, against all odds, started to pump her own heart. This was an incredible turning point. Now she was stable and we were moved out of NICU into HDU down the hall. We used to look into the HDU unit every day on our way to ICU and wish that we were in that room, where the babies were in recovery and were going to be OK. Finally we were moving there. It was a very happy day for us all. From here on we knew our baby girl was going to be OK. The MRI results had come back as clear, with no brain damage visible. They said she would be on heart medications for the rest of her life and that her future, with the metabolic condition, would be uncertain given they didn’t know much about it. Even with this news we felt, for the first time, confident that we could now look at our little baby with hope in our eyes and think about a future with her in it. Lana continued to improve and we couldn’t have been happier. when after one month in hospital it was time to take her home!

She is now 8 months old and thriving against all odds! She is a healthy weight (adorably chubby) as well as tall and strong. On a recent cardiology visit to the hospital they told us her heart now looks normal and she has already come off one of the heart medications, with plans to take her off the others in the next year or so.

She is the happiest little girl; always ready to give the widest smile to anyone she meets. I am so thankful every day that she is in our lives. Thanks to medicine today, amazing care by the Doctors and Nurses at the Childrens’ Hospital, the unwavering support from family and friends and the strong will of our baby girl, Lana. Needless to say, our dream of our bubba in the pool, with her cousins, at Christmas came true. One of the many dreams we have for her to become a reality so far. The future looks bright and happy!

From the Spring, 2015 OAA Newsletter