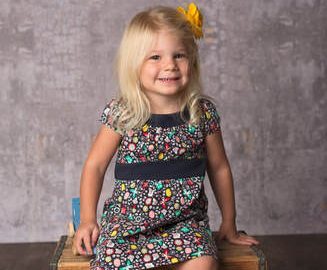 On August 15, 2011, I was getting ready for my scheduled C-Section for my third child.  Kamryn Marie Able was born with no complications.  She was a rather large baby, weighing in at 9lbs 1 oz, but of course, beautiful!  The day we were getting ready to go home, her pediatrician heard a heart murmur.  After performing an echo cardiogram, it was discovered that she had some holes in her heart, but they were small and nothing to be concerned about.  Of course my husband and I were quite nervous about her heart, but we were able to go home and all was right with the world.

The day after we arrived home, we got the dreaded phone call.  Kamryn’s new born screening had come back abnormal.  To be quite honest, I wasn’t even sure what the newborn screening was at the time!  Our pediatrician called and explained what was going on and requested that we re-test her the following day.  I was a wreck.  My husband and parents tried to console me, but looking back I just knew something wasn’t right.  She acted like a perfectly normal baby, but I just had that gut feeling something was wrong.  Her re-test was performed on a Friday and by Monday we had the results.  This is when the worrying truly began.

The next day we were at Lurie’s Children’s Hospital in Chicago, IL talking with Genetic Counselors, Geneticists, and Nutritionists.  All of them told us that her levels had come down on the second test, but they were still elevated. They said we had a better shot at hitting the lottery than her having Malonic Aciduria.  I guess I should have bought a ticket!  The following week, her lab work confirmed that there was an issue and we needed to come up and discuss her formula and overall lifestyle.  We were in complete shock.  We had two other healthy children at home and had no idea what to do.  So I immediately jumped on the internet and started “Googling” the disease…NOT a good idea!

Every piece of information I saw stated that we were going to be lucky if she made it through infancy and if she did, she would more than likely have severe mental development issues, cardiomyopathy, muscle development issues, and the list went on.  We were devastated to say the least.

We immediately started Kamryn on her new formula, Lipistart.  We were told by our doctors that we should perform frequent feedings and to watch for any symptoms, such as hypoglycemia.  I finally asked the doctors what specialist I needed to fly her to see in order to ensure she was getting the appropriate care.  They just stared at me.  They explained that there were no specialists and Kamryn was one of 30 cases ever reported.  We left that hospital visit feeling very confused, distraught, and just all around depressed.  For the next following weeks, we began to realize that Kamryn was behaving like all our other children had and really, she was doing quite well.
​
Luckily, Kamryn has been developing like a normal child!  She began walking at 7 months old and has continued to amaze her doctors.  We have not had any episodes that have required a hospital stay at this time, and we count our blessings every day.  Kamryn is now 3 ½ years old and a complete joy to be around.  She is really starting to understand what she can and cannot eat and will ask if it has “fat” in it!  She amazes us every day with her positive attitude and determination.  Kamryn does not let anything stand in her way!
​
After Kamryn was born, we felt like we needed to do something for kids suffering from rare diseases.  We knew that we didn’t want other parents to have to feel the same way we did when leaving that hospital visit with her diagnosis.  So, we set up “The Hope Fund”.  We had our fist fundraising event in March of 2012 and raised over $10,000.  This is when we started the Malonic Aciduria Research Grant in conjunction with NORD, The National Organization of Rare Diseases.  Last year we raised over $20,000 and are very close to meeting our research grant goal!  This year we are in the process of preparing for our St. Patty’s Day Bash which will be held on March 21, 2015 in Kankakee, IL.  Tickets are $50/per couple, which includes dinner and live band!  We will have a silent and live auction as well.  The ticket also enters the couple in for three cash prize drawings. First prize will be $1000, second prize will be $500, and third prize will be $250!  For more information about our event or tickets, contact fundthehope@yahoo.com.

We are very hopeful that we will meet our research goal this year.  Finally, we can get some new research about this disease and possibly what these children’s future entails.

From the Spring, 2015 OAA Newsletter