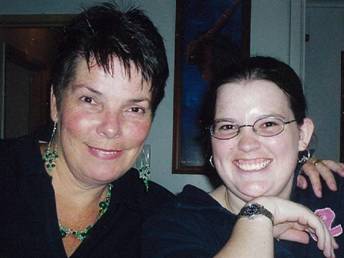 My name is Joanne and I am 22 years old. I currently live in Rockhampton, Queensland Australia with my Mum, Jenny, her partner Merv and several pets.

I was diagnosed with Methlymalonic Academia Cbl A at 14 years old. At 10 weeks old, after numerous testing, I was diagnosed with Renal Tubular Acidosis which was originally thought to be idiopathic. As I was growing up my milestones were delayed because I was sick and in hospital. I was admitted to hospital 14 times in two years, a family record! I saw a speech therapist before I started school to learn to speak properly.

I don’t remember much of the tests or hospitals admissions. The earliest I remember is being in hospital-I think I was about 5 years old- and I was in the same ward as an 8 year old boy who had a broken arm.  His parents were unable to spend a lot of time with him.

During my years in primary school, I did fairly well although I did regularly see the special teacher for extra coaching.

After 13 years of going steadily along with my creatine barely rising, it started increasing and I started becoming more tired and exhausted.

Post kidney transplant which was in July 2001, I was not as well as to be expected, the doctors retested me for all the diseases that I was tested for as an infant and more. I had many bloods and urine samples taken.  I remember when my metabolic specialist and Mum answered the phone, they told her my levels were in the 4000 range, and that we had to go to the hospital pharmacy to pick up liquid carnitine. We said we would go tomorrow and they said No, you need to go now. That stuff tasted terrible and I was glad when they put me onto the capsule form.  I was also on daily injections of Vitamin B12. As mum is a nurse she injected me. I hated mum for that as those shots hurt and left bruises.   The injections slowly decreased from daily to 3 times a week till once a week. I still remember we were in Sydney, and my Mums cousin who is a nurse saw mum getting the injection ready, Mum said that her cousin was welcome to do it and she was willing till she saw what the injection was and backed away. Ha-ha.

Fast forward to eight years later. I am currently on 2 mills of oral Hydroxycobalamin or oral Vitamin B12 and Injections only when I get really sick.  I am also on numerous medications for the transplant.

I am not on any diet restrictions however I am not a huge fan on red meat, or am I a fan of vegetables or fruit but I have been recently trying to introduce them back into my diet. Not so much luck there.

I annually see my metabolic specialist and see my renal physician every six months.  My last visit was in September and I am doing fantastically.

Due to me being so sick in school and never being able to keep up, I decided to leave high school. My mum was supportive with that decision.  A couple of years ago, I did go back to Tafe to complete my senior education and finished last year with flying colours. Even better then when I was in school. I am currently working part time and have decided to go back to Tafe and study Certificate 111 in Business Administration. I plan on studying part time whilst working as well.
​
Joanne

Hi everyone I am Jo’s Mum Jenny.  Jo was my second child. Her brother Shane is now 28. Shane is unaffected and he has a 5 year old son Darcy who is also unaffected.  Jo was born at 41 weeks gestation after a normal pregnancy. I started breast feeding and everything seemed to be going along as it should. Jo smiled at 6 weeks and started making sounds etc. She was not a great feeder and I can remember some days all I seemed to do was continually feed her. I always had a gut feeling that something was not quite right although told myself I was being paranoid due to sleep deprivation. I am a registered nurse and Jo’s Dad (my ex husband) also told me I was imagining things.

One day when she was 10 weeks old, I definitely knew things were not right. She vomited a couple of times, was lethargic and I could smell ketones on her breath. She had not been gaining weight and became a little floppy. I took her to our GP (who I also worked for) and he thought it was a urinary tract infection us there were no other signs or symptoms. I took her home and was to get a urine specimen. That night she would not feed, became more lethargic, did not pass urine and began projectile vomiting. My small gut feeling was now ENORMOUS…. I just knew something was wrong. I went straight to the GPs in the morning. By this stage she was grey, glazed eyes and like a rag doll. (The GP later told me he was so worried about her and he thought she would not make the trip to the hospital).

Our paediatrician met us at the Royal Children’s hospital. They initially thought she had pyloric stenosis but after x-rays and blood tests this was ruled out.  I can remember a doctor walking in with a text book in hand apologizing as they were not 100% sure what was wrong with her. After numerous tests and procedures such as bone marrow biopsies and catheterization she was thought to have Idiopathic Renal Tubular Acidosis. Jo would go into metabolic acidosis requiring hospitalization with a drip and IV sodium bicarb. Life continued with regular Doctor visits, physio and speech therapy due to delayed milestones. Jo did not walk till she was 24 months or talk until she was 4.

A kidney biopsy at 5 showed she had interstitial fibrosis due to the RTA. We were told then she would need a kidney transplant in her early teens but that seemed so far away I didn’t give it much thought. Besides I was focused on the now, just living day by day and hoping that Jo would fit in at school and make friends etc.

Over the years we had regular visits to the nephrologist  and Jo’s  creatinine slowly increased and she developed end stage renal failure requiring EPO injections and increasing medications.  In May 2001 I began tests to see if I was a suitable donor for Jo. The transplant went ahead on July 9 2001.  Jo was still becoming acidotic so this time they decided to run the same tests they did back in 1987 and this time they were positive for MMA. After all these years we finally had a diagnosis. I later heard that the pathology lab did not test for MMA back in 1987.

My first contact with Dr. Magill, Jo’s metabolic Doctor, came at this time with a phone call with him telling me the side effects of MMA and saying I don’t want to alarm you but you will have to start medication ASAP.

It has now been 8 years since Jo’s transplant and diagnosis of MMA. We have since discovered she has Cbl A and hers is a mild case. Looking back over the years Jo has come a long way and I am proud to see the young woman she has become. My goal for her has always been for her to be as happy and independent as possible. She now takes most of the responsibility for getting her prescriptions etc and will see the GP on her own although she still likes me to go to the specialist appointments with her.

She still has her good and bad days health wise and tires easily . She now suffers from depression and anxiety and has side effects from her anti rejection medications. Unfortunately her Dad left us when she was 15 and he chose to have no contact with Jo or her brother. This also affected her but she is slowly working through these issues.