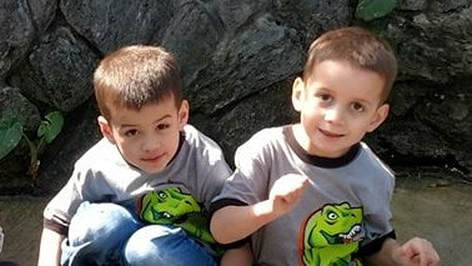 D-2HGA is a very rare neuro-metabolic disorder in which cells produce a toxin that causes progressive damage to the cerebrum, the part of the brain that controls speech, memory, and movement. Since its discovery in 1980, there have been approximately 150 individuals diagnosed worldwide. Currently there are 31 gene mutations that can cause D2HGA, and two cases with no known gene mutation. Symptoms of D-2HGA include: Intellectual Disability, Muscular Hypotonia, Encephalitis, Seizures, Dysphasia, and Death. In some cases, there are no symptoms at all.

We are a family of five living in a small Kansas town. We have three children: Connor age 6, Nathan age 5, and Alyssa age 3. Connor and Nathan have both been diagnosed with D-2HGA, and even though they both have the same genetic mutation, they are on different ends of the spectrum when it comes to the disease. Connor has seizures which are controlled by one seizure medication. Nathan on the other hand has intractable epilepsy and is currently on four different seizure mediations and has a VNS to help keep the seizures under control. Recently Nathan had pneumonia and had an NG tube placed because he developed dysphagia, and has lost the ability to swallow water without aspirating it. Despite their current health concerns, both boys are still very active, and on warm summer days can be found in the swimming pool, or playing at the park.

I feel it’s important to share the backstory of how we got to this diagnosis because we did not find out from a newborn screening. I don’t remember the exact dates but I can tell you it took almost three years to get the proper diagnosis. Our journey started when Nathan, my youngest son, had a seizure when he was two. Doctors decided it must have been fever induced because he had been sick, but his fever had never been very high. Shortly after, Nathan started having what some health care providers called “abnormal movements”, he started twitching his head, and falling for no reason. For two years, these abnormal movements were spontaneous occurrences in our lives, which happened more when the season changed or when he was sick.

Every time we went to the hospital for help with these “abnormal movements”, I would advocate for my son saying there is something wrong with his body, and in response I was told there is nothing wrong, that they didn’t see anything, or that I was overreacting. I took video after video of his “abnormal movements” to show health care providers. When these movements occured during an ER visit at a children’s hospital I was told, “he won’t get hurt falling like that”. But he was getting hurt from his falls, and there was no explanation for the unusual movements that were causing his falls. Finally, after two years of struggling to get help, KU Medical center heard my pleas for help for my son. Nathan was admitted, and after an EEG we were told Nathan had epilepsy. At last, progress. Unfortunately, that was just the beginning.

Nathan was placed on a seizure medication which made his seizures worse. I tried telling the doctors about this new development, and even though we had a neurologist, I could not get anyone to listen. Nathan’s seizures intensified to the point he could no longer function by himself. He could not stand more than a moment without falling. He couldn’t walk, talk, or feed himself. I called his neurologist office for help daily, I even called the afterhours number to speak with the on-call neurologist hoping to get someone that would listen. I went to our local ER where a doctor told us to increase his medication, so we did, and Nathan got worse. After what seemed like an eternity of watching my child go through hell, his neurologist got us in to a 48-hour epilepsy monitoring unit. Within the first few minutes of Nathan being connected to the EEG, doctors and nurses ran into the room to stabilize him. At last Nathan got the help he needed to stop the seizures, but we were not prepared for the diagnosis we were about to receive.

When Nathan was seen at KU med center, the EEG showed a certain kind of seizure, Nathan was placed on a medication called Trileptal which should have helped but instead it made his seizures worse. I remember our Neurologist asking questions about Nathans development.  Nathan reached all his milestones on time, and despite having uncontrolled seizures continued to thrive. Nathans Neurologist talked to us about organic acidemia that could be the cause of his seizures, when D-2-Hydroxy Glutaric Aciduria was first mentioned I did some brief research and then brushed it off. I thought, there is no way, this condition is so rare and Nathan has none of the symptoms other than seizures. We consented to the urine screen and blood test, but we let it go and did not give it another thought. That is until we got the phone call confirming our worst fear, Nathan has D-2-HGA.

My life stopped that day, and I felt myself die. My sweet boy who loved life and had been perfect was ripped away from me. I worried about him and what his life was going to be like. I was mad at myself, I fought so hard to get him help and ended up with a diagnosis that is just unfathomable. I could not understand how all this happened, why there was no indication on his newborn screening and why, why did this have to happen. I spent days crying trying to figure out what was going to happen to him. After some time processing what was going on, and trying to wrap our brains around this big, scary diagnosis, which has no cure, we had our other children tested. My Oldest son Connor tested positive for D-2HGA, but Our youngest child Alyssa did not.

I wanted to write about the real feelings of what It’s like getting the unbearable news, what I was thinking and how hard the fight is to get medical treatment because I know we can’t be the only family going through this. Now that we have this big scary diagnosis, some might think that getting help is easier, but it’s not. Sometimes it’s harder. No one in our area has ever treated D-2HGA and on Nathans bad days, our ER visits might lead to a life flight to Children’s Mercy, which is 120 miles away. Our local hospital could probably manage his symptoms, but due to his diagnosis it seems like most doctors are overwhelmed and unwilling take on the responsibility of treating him.

Now that we have the correct diagnosis and we have processed all the information, we try to embrace that Connor and Nathan are rare, and they have a genetic mutation that is unseen. To us that means the boys can write their own stories, and the small amount of research that has been done on D-2HGA, with all its bad news does not apply to us.  We embrace life, we make changes that help the boys. For example, instead of Nathan doing physical therapy, he does gymnastics. There are no rules when it comes to rare diagnoses, so we roll with what life throws at us.

To the other families who are fighting to get medical treatment, or have a child that received a big scary diagnosis. Don’t give up. Stay positive, know that your child is an individual and their body is different than that of other kids, with the same diagnosis. Take the time to grieve, then embrace the new. Your child is special but they are not defined or limited by their diagnosis. Seek out community support so that your children know how loved and special they are. For us we have the Eagle Riders of Junction City who are amazing, they are conducting a poker run to raise funds to keep the boys in gymnastics, so my husband and I can focus on paying for medical treatment. Most importantly, know you’re not alone, and that you and your children are not defined by a label or diagnosis.