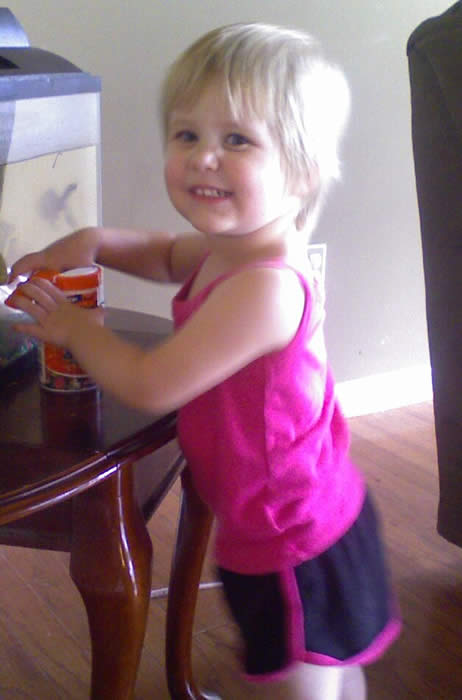 On December 2, 1980 after a text book perfect pregnancy and delivery our daughter was born.  She had a head full of red hair and the Dr. said she was perfect. We named her Christina.

We had decided on breast feeding because I had heard it was better for the baby. The second night in the hospital when they brought her to me to feed I noticed she didn’t seem to want to eat. I mentioned it to the nurse and she said she may just be tired and not to worry.

By morning she was in the special care nursery. She was lethargic and breathing heavy. When they took me to see her they had shaved off her red hair and had an IV in her head and a thing that looked like a keg tap where her belly button was. They gave me a picture of her that they took before they shaved her head and an envelope with the hair they had shaved. They told me they thought it was a heart problem and that they wanted to send her to Riley children’s hospital.

She was transported by ambulance to Riley. It took a couple of hours for my husband to get to the hospital and get me checked out before we could join her there and by the time we got there she had been seen by the metabolic specialist at Riley. Dr. Ira Brandt. He told us that she had either methylmalonic acidemia or propionic acidemia. How they got a tentative diagnosis that fast I don’t know but by finding out so fast and starting treatment immediately saved her life. Her ammonia level was 800 and her co2 was 2. I don’t remember any of the other levels. It took several days to get her ammonia down and by then they had a diagnosis of MMA. She was the first MMA baby anyone at riley had ever seen much less treated. Most of what they did was done from common sense and not science. They stopped her feedings and turned up the IV to flush her system of the ammonia’s and acids. We signed a form to allow them to do a kidney dialysis (spelling) but it wasn’t necessary because her kidneys worked to get rid of the toxins and with the extra IV fluids she was flushed out in a few days and was able to take low protein feedings.

There was no medicine for MMA. All that could be done was to put her on a protein restricted diet as her body could not process protein. I was told that I couldn’t breast feed her because they needed to measure the amount of protein she took in every day and that would be impossible if she were breast fed so we switched to a mixture of Enfamil and water with vitamins and Polycose. We later replaced the water with Pedialyte because she was always vomiting and she needed the electrolytes. We also had to give her injections of b12 twice a week.

When we asked what we could expect in the way of a future for her we were told not to expect her to live over a year old and that if she did live she would be brain damaged. The extent of the damage they didn’t know but that there was damage. At that point I didn’t care. All I wanted was for her to live.

We took our baby home on Dec 19 and were admitted back into the hospital on Dec 21. We had 10 total admissions in the next 3 years. Some for a few days and some for over a month. I had 2 bags packed one had my things and one had hers. We bought night gowns and cut the shoulder seams and put ribbons on them so we could change her gowns even when she had an IV. Now days they have gowns that tie at the shoulders but back then it was a problem when you had an IV to change clothes, and with all the vomiting she did we had to change her clothes a lot.

When she was 9 weeks old they did a skin biopsy that came back proving she was not b12 receptive. That was a big disappointment but at least we didn’t have to give her shots anymore. When she was 9 months old they put her on Milupa os1, a formula made in Germany that was specially made for kids that were on low protein diets. Before the Milupa she vomited several times a day. After the Milupa the vomiting doubled. It got to the point where she didn’t even want to try to eat because she knew she would just be vomiting it back up. For 4 months we tried to make it work with the formula and it was the worst 4 months of our lives. After a month long stay in the hospital Dr. Wappner told us to stop the Milupa and go back to what we had been doing. She still vomited daily but not as much or as often. I know that if she had been born now instead of 25 years ago they would of installed a tube into her tummy to pump the formula in so that she would be able to take it, but 25 years ago tubing had not been thought of and by the time it was she was doing so good we didn’t think it necessary.

At 2 years old she started walking and she also tossed her bottle at me and would never take it again so we went to solid foods and sippy cups. She ate things like steamed carrots and green beans and spaghettis. In fact she ate so many carrots the palms of her hands and soles of her feet turned orange which scared me half to death thinking she had a liver problem. The Dr explained that it was due to the carotene in the carrots that caused the orange color but since she loved them so much and would eat them when she wouldn’t eat many other foods we got used to her orange color.

She was doing better than we ever expected her to do but she was still vomiting at least once a day and still having to go into the hospital several times a year.

When she was born they told us there were only 10 children living with MMA mut0 in the whole country. There are a whole lot more than that now. She did have some brain damage. She was dyslexic and learning to read was hard for her but we bought hooked on phonics and she soon caught up to her class. She also had to take speech therapy for several years. She would have to work twice as hard and twice as long on her school work as other kids to get it right but she did the work and most times she ended up on the honor roll. She made up for a leaning disability with determination and hard work. The only true disability she has now as far as the brain damage goes is that she thinks and feels like a 12 year old. Her social skills are way behind and don’t ask her a question if you don’t want a totally honest answer. Things are black or white and there is no grey area with Christy. If she’s hot she will roll her pants legs up and not care where she is or if people think she looks silly.

Once in high school she walked into the bathroom where two girls were smoking and gave them a lecture on the danger of smoking. The only thing that saved her from getting beat up was that one of the girls knew about Christy and stopped the other girl from hitting her. Because of this when it came time for college Dr. Wappner said she shouldn’t go to college alone so I started with her. We went for 3 semesters till I had to drop out for health reasons. If you ask Christy she will tell you we had to drop out until mom looses enough weight to get around campus. This is the truth but not how I would put it. Physically she is not as strong as others her age and she wares out faster than most. She also sleeps 12 hours a day and isn’t as active as others her age. We have to be very careful of germs because any illness can trigger an acidotic episode .She has never tasted meat or nuts or drank a glass of milk. She only gets around 25 grams of protein a day and those come from mostly fruit and vegetable.

This spring we went to the N.I.H. in Maryland because they wanted to find out why Christy is doing so much better than expected. She is the oldest MMA mut0 child with her own organs. The acid that MMA mut0 kids have in their body’s usually causes them to need transplants by the time they reach their 20’s. The test they ran showed little or no damage to her organs. Dr Venditti has her D.N.A. and will be studying that over the next few years looking for an answer to why she is doing so well. Our greatest hope is that research will find something to give all the MMA children a chance at longer, healthier, fuller lives.