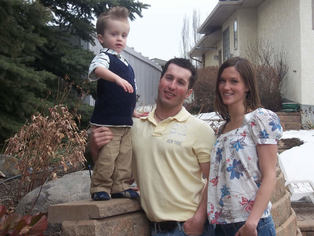 Hello everyone, my name is Amber and my husband Keith and I are the parents of Carter, age 2 ½.  Carter was born on June 11, 2005 after a normal and uneventful pregnancy. He weighed 7lbs and 14oz and was 19 ½ inches long.  He appeared normal and healthy; the doctor’s only concern was over his head which was heavily bruised after a hard birth.
​
We were asked to bring him in after one week to monitor the bruising, and that was where the trouble began. The bruising and swelling went down, but his head grew from the 50th to the 90th percentile by the time he was six weeks old. By the time he was 5 months old, it was off the charts.

Our family doctor sent us for an ultrasound on his head, but because his soft spot had already started to close, the decided to send us for an MRI, just to be safe, but they did not suspect there to be anything wrong.  He was seven months old by the time we had the MRI done.  When the results came in, we were told that Carter had subdural hematomas.  My doctor told me that Carter had to have been dropped, or maybe fell from his highchair, or shaken for this to occur. She told us that we would have to take Carter for x-rays to look for any signs of child abuse, and that she would have to report us to child welfare.
​
This was devastating news to us.  Carter had never had a serious injury while he was with Keith and me, and because he had only been left in the care of close family members, I began to suspect the people I trusted the most. I thought that maybe somebody had dropped him and was too afraid to tell me, I had never heard of Glutaric Aciduria Type 1, and was unaware that the bleeding was a common symptom of the disorder.

After it was determined that Carter was okay, life went back to normal for a while.  A neurologist told us that Carter had some abnormalities in his brain, but because he was developing normally and had met all of his milestones not to be too worried and to report any concerns.  Our doctor decided not to call child welfare because she believed in us, God bless her! I have heard of families who get their children taken away before they are diagnosed with GA1, we are so lucky to have such a great doctor that took a chance on us.

In May of 2006, when Carter was 11 months old, he woke up one morning with a really terrible flu.  He spent the whole day sleeping and vomiting with a high temperature.  I decided to take him into emergency when he began to throw up bile, and became almost incoherent.  He was put on IV fluids, and perked up almost instantly.  A CT scan was done because of his history of hematomas, and more bleeding was found.  We were also informed that Carter had two arachnoid cysts, and that there was a large amount of fluid on his brain.  They decided that the fluid could have been causing him to vomit and that they needed to operate to relieve the pressure.

We stayed in the hospital for 2 weeks.  Two surgeries were performed and three holes were drilled into his head to release the fluid.  He had tubes coming out of his head and had to remain almost perfectly still in order for the fluid to drain properly.  Watching my baby go through so much pain was the hardest thing I have ever had to face, but seeing how happy he stayed through the whole experience was inspiring.  We were still unaware of his GA1 diagnosis through this whole experience.  When we weren’t starving him for the surgeries, I was feeding him a high protein diet and was encouraging him to eat meat.  He also did a lot of throwing up during this time and was not on IV fluids.  It is truly a miracle that he did not go into a metabolic crisis, and is the thriving 2 year old he is today.

Two weeks after our release, Carter’s incisions from the surgery became extremely infected, and on his 1st birthday, we were back in the hospital.  Carter had had a fever for two days prior, and to make sure the infections didn’t leak into his brain, another MRI was performed. This time a neurologist noticed something, she told me that his basal ganglia was “lighting up like a Christmas tree”, and decided to take some urine tests.  He was finally diagnosed with Glutaric Aciduria Type 1 on July 7, 2006.

We were sent to the metabolic specialist and dietician, and our worlds were turned upside down. He was put on a low protein diet with Carnitine and riboflavin supplements.  I began to weigh out all of his food, and keep a daily record of his lysine and calorie intake.

Those first few months were very overwhelming.  We were terrified for our son and his future. Every time he went to sleep, I was worried he might not wake up the same from a minor fall or some unknown infection.  We had a special helmet made for him which he still wears to protect him from the many falls an active two year old makes.
We are more at ease these days, but we still keep him very isolated during cold and flu season. We stay away from anywhere where there are crowds of people and do not allow anyone to enter our home if they have a cold or flu.  We have missed out on a lot of family gatherings, Christmas, Thanksgiving, due to someone being sick.

Carter still needs to be hospitalized when sick if I cannot keep his calorie intake high at home, so we do everything we can to avoid those situations.  When he does need to be hospitalized, we take him to Emergency where they have his protocol, there is no wait time for us and he is put on IV fluids usually within 10 minutes of our arrival.

Today Carter is a very healthy, happy boy. Despite everything he has been through, there seems to be no developmental delays or prominent injuries.  We were told that he may have a slight injury that could affect his coordination, but two year olds are so clumsy that it is hard to tell.

Although these experiences have been the most frightening we have ever been through, I would not change anything. Carter has taught me to appreciate the little things in life.  I also had to learn acceptance, and to stop obsessing over his health and rely on God to take care of him. Glutaric Acidemia Type 1 is such a unpredictable disorder, that we still fear for Carter’s health every day, but we try to treat him like a “normal” two year old boy, and always emphasize that fact to others, everywhere we go.

From the Spring 2008 OAA Newsletter