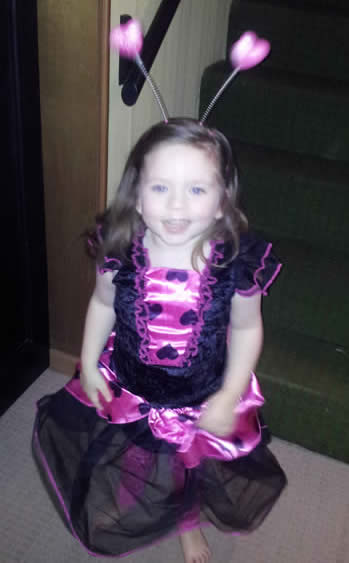 Becca was born in 2009 a healthy 7 lb. baby.  She began breast feeding right away with no issues and kept it up for 2 ½ days. Because she was delivered via a c-section we were still in the hospital on day 3 of her life. We actually would have gone home on day 2 except her weight had dropped a fraction to much. My husband and I were in fact upset with the doctor for not letting us go home because she basically said she just had a gut feeling we needed to stay one more day.  (Thank God for gut feelings, as we all know now, they save lives.) During the early morning hours on day 3 of Becca’s life she swiftly deteriorated.  She no longer would latch on and breastfeed, she became lethargic which rapidly progressed to nearly unresponsive. When we first noticed a change we notified the nurse who did not seem alarmed. I insisted we try to supplement her feeding however Becca was not interested.

We began asking for a doctor around 3 or 4 am, unfortunately no one called the doctor because they did not feel it was necessary as the doctor was expected on rounds in a few hours. At 7 am the day shift crew came in and our nurse from the previous day was alarmed at the condition of our little baby girl. The nurse notified her supervisor of the situation and called the doctor immediately.  During this time Becca continued to deteriorate and was getting closer and closer to being unresponsive. Labs were drawn including arterial blood gases which indicated severe metabolic acidosis. The nearest pediatric specialists, in a town over an hour away, were consulted resulting in a transfer. The transfer team arrived and in order to preserve Becca’s current status they intubated her for the trip to the children hospital. We were loaded into an ambulance and on our way while Dad and family followed.

Once we arrived at the children’s hospital Becca was admitted to the NICU (neonatal intensive care unit) and more tests were done to try to determine what was causing her condition. It did not take long for the team there to diagnose a metabolic disorder, MMA (Methylmalonic Acidemia). By this time Becca’s ammonia level was 1200 times that of normal. In order to bring her ammonia down and prevent any or further brain damage she was placed on dialysis. Dialysis is not done in our NICU so we were transferred to the PICU (pediatric Intensive care unit) which meant we could be with Becca 24 hours a day as opposed to the NICU.

Becca responded well to the dialysis and remained in the PICU for a few days for additional studies to determine the extent of damage caused by the high levels of ammonia. We now know how fortunate we were because there appeared to be no long term damage done. We were transferred back to the NICU for a couple days for monitoring, education on MMA, and how to care for Becca from now on. This was a scary time for us as we found out hardly anyone we encountered had much experience caring for an MMA patient if any. So began our journey into self education and education of our care teams.

We were discharged home and made the decision to move into my parent’s basement in order to allow my husband to quit his job and become a stay at home dad (I had the insurance so I needed to keep working now more than ever.) Over the next year Becca did quite well with being bottle fed and I was allowed to Breast feed her once a day. In her second year of life things began to change for us. Becca had several metabolic crises requiring hospitalization, mostly due to minor viruses.

During Becca’s second year of life she was hospitalized over 9 times, had numerous ER visits, and I practically missed more days of work than made. It became increasingly difficult to get adequate nutrition in Becca so we made the difficult decision to have a G-tube (gastrostomy tube) placed as well as a port placed for IV access due to the torturous IV sticks Becca repeatedly had to suffer through not to mention us as we stood by watching poke after poke in our little baby. This ended up being one of the best decisions we could have made. After the g-tube was placed we were able to treat Becca at home much more effectively.  During her third year of life she was hospitalized only a couple times for 2-3 days, however one of the metabolic crisis lead to a seizure and a metabolic stroke leaving Becca with some mild tremors and balance issues.

In October of 2012 we went to NIH to meet Doctors Charles Venditti, Irini Manoli, and the rest of their team who are in my opinion the leading experts on the treatment of MMA because of their knowledge of the largest group of MMA patients any one physician has seen. While gathering data from and about Becca for their research projects it was determined, based on methods used by the NIH team, that Becca’s kidney function was worse than standard testing had determined. Based on this data and all the other information gathered while at NIH Dr. Venditti and his team highly recommended we begin the process of combined kidney and liver transplantation sooner rather than later.

Once we returned home we began discussing the idea of transplantation now with our metabolic team. Although not all of them agreed it was time, we had one very vocal advocate for transplanting now verses waiting for a more severe metabolic crisis that leads to brain damage or worse. So the referral was made to the transplant team at Lucile Packard Children’s Hospital (LPCH) in California.  In May of last year we went to LPCH for Becca’s initial evaluation for transplantation. In June of 2013 Becca went active on the transplant list. We received an offer for transplant in August that we had to turn down due to Becca being ill. In October of 2013 we received our second offer and we accepted it. We boarded a jet that same day and flew to California. Almost two days later and after a 12 hour procedure Becca had her new liver and kidney. Becca was discharged post op day 10 and we returned to Oregon on Thanksgiving Day.

Since we live over an hour from the nearest children’s hospital we decided it was best to temporarily move closer. Thankfully my husband’s family is large and extremely kind so we were able to stay with family for the last 4 months. It has been almost five months since transplant and Becca is doing fantastic. As always she surprises us all with her strength and fight. Due to how well Becca is dong and the fact that any winter storm threats of closing our route to the children’s hospital have passed we have finally returned home. Becca continues to impress us all as she begins to enjoy a variety of foods and accept her new scars as stripes she has earned.

I hope you have enjoyed this brief overview of our journey with a child with a metabolic disorder even though it has really just begun we have already learned so much. If we could give anyone any advice it would be to always fight for what you feel is right even when the doctors don’t agree, keep learning everything you can, if you have the opportunity to meet the team at NIH leap at it as they will prove to be some of the best advocates for you or your child, and a lesson well learned by us – don’t wait to have a g-tube placed if you think it may help your child.

From the Spring 2014 OAA Newsletter