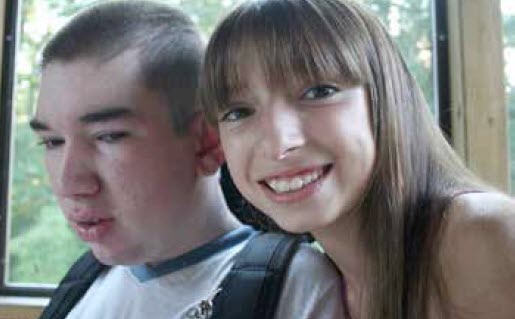 I enter every spring with mixed emotions, because I am reminded of the day that life changed forever for us and Isovaleric Acidemia became a part of our lives. Our Stephen, the third of four children was one of many who received a diagnosis as a result of an acute metabolic acidosis that would nearly take his life, due to lack of comprehensive newborn screening when he was born. It’s hard to believe that this May 30th will be fifteen years since that devastating day when our sweet 3 ½ year old son so full of life and possibilities would go from playing with his brothers to fighting for his life. He will forever remind us how life can change so abruptly when you least expect it. After three weeks in a coma on life support, Stephen opened his eyes and continued to recover, but time would reveal that his metabolic crisis would leave him with severe intellectual and developmental disabilities and multiple medical issues. In a way, we were the lucky ones, because so many families before us lost their babies and children in similar situations. After four weeks in the hospital and six weeks in a children’s rehab center, we brought Stephen home to begin finding our new normalcy that revolved around his many needs and learning to understand him and how to care for him. We also had to adjust to the impact on our family and navigate our way through the changes as we each tried to heal from the tragedy that we all endured. Eight months into Stephen’s recovery, brought another life change. I was expecting another baby. Our daughter Caroline was born in September 2002. She too has Isovaleric Acidemia, but her diagnosis came early with an amniocentesis. Tom and I could not bear the thought of waiting until she was born to test for IVA for fear of her going into crisis after birth. While her early diagnosis was disappointing and saddening, we were able to process the news and come to an acceptance while preparing with the specialists for her birth. When it was time for her delivery, we were focused on just our baby girl coming into the world and not our baby with IVA. Since then, we have never let IVA define our daughter. Those early days after Stephen’s crisis and Caroline’s arrival seem like a lifetime ago, especially when I look at how much they have both grown.

Since my last update, Stephen has endured the many ill effects of his crisis. While remaining metabolically stable, his medical issues due to his neurological damage are his ongoing challenges. After years of progression of his scoliosis and kyphosis, Stephen required major spinal surgery for a spinal fusion. In January of 2011, he underwent a ten-hour surgery to insert two titanium rods and twenty-seven screws to straighten and fuse his spine. Due to multiple complications, Stephen spent thirty days inpatient. It was a time that once again, altered life for our family and reminded us of his days after his crisis. It was then that I called him my “apple cart.” When you take one apple out, they all begin to fall out. When you alter one thing with Stephen, other things come unraveled. Despite the complexity and recovery, this surgery was worth every challenge, because it improved Stephen’s quality of life immensely. He can finally hold his head up again independently after years of therapy. He can also tolerate and enjoy hours in his wheelchair when prior to surgery, he was not able to find comfort in his chair nor could he hold his head up. Time in his chair means more opportunities and outings, which he enjoys. His long recovery affected his positioning and allowed his hamstrings to tighten. One year later, he endured another surgery for bilateral hamstring release to straighten his legs again. He continued with a series of surgeries for issues that kept creeping up including a wound vac placement after the removal of a small deep tissue infection, the removal of his left testicle that retracted again and most recently, the extraction of all four wisdom teeth. While dealing with these issues, we discovered that Stephen was constantly developing a great deal of sediment in his urine to include small stones.

After detailed testing, we discovered that he was consuming more calcium than his body needed given that he is not weight bearing. Together, the nephrologist and metabolic dietician worked to find the appropriate formula to meet his dietary needs while not overloading him with calcium or protein. Our challenge was finding the appropriate natural protein for him. He has been on Nestle Complete and Ivalex since then after removing milk from his diet. He was also diagnosed with neurogenic bladder, which was contributing to sediment build up and repeat UTIs. With this diagnosis, I learned my new skill of cathetering, because Stephen would need straight catheterizing multiple times a day to help empty his bladder. A few of Stephen’s UTIs resulted in life threatening sepsis and time in ICU, but more frequent catheterizing and gentamycin irrigation inserted into his bladder three times a week has helped tremendously. He has done very well with this routine.

Stephen continues to be our miracle boy and our little boy of so long ago turned eighteen this year! This was such a huge milestone to us that we decided to celebrate in a special way. As a family, we hosted the first annual Stephen Monaco Birthday Golf Outing and Dinner Fundraiser. It was a huge success and given how much we value the need for patient and family support, we decided to create a special fund at Children’s National Health System in DC where Stephen and Caroline are followed. This fund will benefit the Division of Metabolism and Genetics and support educational programs and resources for patients and families along with research studies. We felt this was the best way to honor Stephen, since we couldn’t celebrate in the typical fashion for an eighteen-year-old and it was a great way to bring family and friends along with staff from Children’s together to celebrate him. Turning eighteen brought another inevitable process our way that comes with having a child with special needs. We had to apply for guardianship for him, which was a long and grueling process, but a very important one. Once that was complete, we applied for SSI for Stephen to receive disability benefits since he was over eighteen. This was a more daunting process compared to guardianship, but again, one in Stephen’s best interest and one he is entitle to have.

As we dealt with Stephen’s issues over the years, we still had Caroline to manage. She has been quite healthy except for one admission for a gastrointestinal virus and the flu. Both required a five-day hospital admission. Otherwise, Caroline’s greatest challenge is gaining weight and consuming enough protein. She has consistently dropped on the growth chart for weight and is currently extremely low. She has never been a big eater, but thankfully, loves her formula. When she has been sick, it’s the only thing I can rely on to sustain her through the illness. Aside from her medical needs, Caroline has grown into a happy, healthy thirteen-year-old. She is in seventh grade this year and does well academically. Caroline took dance lessons since she was five years old and played softball for a few years. However, she hung up her dance shoes and cleats for riding pants and boots when she fell in love with horseback riding two years ago. Riding horses and spending time with them is her greatest passion and serves as a wonderful way to build physical strength, deal with anxieties when Stephen is hospitalized and instill great life lessons in her.

As Stephen and Caroline have grown up over the years, they continue to inspire me to pursue my advocacy efforts for newborn screening and rare diseases along with patient and family centered care initiatives. Representing OAA in Washington and on the national level helps to raise awareness for our organic acidemias and the needs of our patient population. Inserting my voice for OAA at this level helps to impact health care and policy for our disorders and ensure patient centered outcomes as these babies and children continue to grow up and reach adulthood. As I reflect on our journey that began almost fifteen years ago, the image of that playful, happy go lucky little boy remains in my heart and mind. This year is particularly bittersweet as I ponder on the many lost dreams and opportunities in what would have been Stephen’s senior year of high school. We think about it, but don’t dwell on it. Instead, we celebrate his life each day, the happiness that he feels and experiences with us and the way his life has helped to change newborn screening preventing other children from sharing his fate. We find great joy in watching Caroline grow up leading a normal life with IVA and like her two older brothers, looks out for Stephen and helps with him. We celebrate how our family found our new normal over the years in this ongoing journey, since IVA became a part of it and are most grateful for the families in OAA who have supported us throughout.

From the April 2016 OAA Newsletter