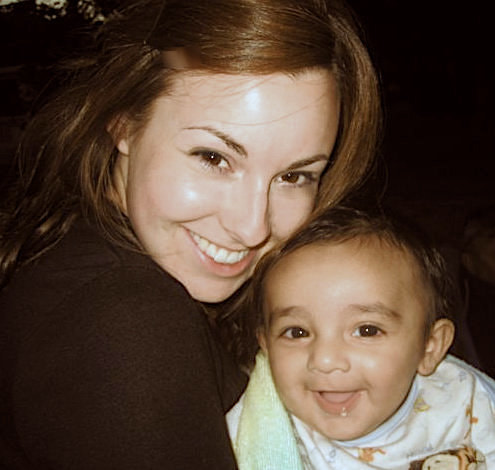 Pregnant mothers can count on one certainty: that a clear or “normal” 20-week prenatal anatomy ultrasound produces an involuntary sigh of relief. You find out that everything is, quite literally, in place. You are halfway to the finish line and could really use a reassuring pat on the back. Despite discovering that we had a two-vessel cord, my midwife assured me that all was as it should be. Most umbilical cords contain two arteries and one vein. Ours was missing one artery. We had multiple ultrasounds until birth to ensure that baby was growing well and that there were no signs of physical abnormalities due to this small hiccup.

And all continued to be well. In April 2010, after a normal and fairly comfortable pregnancy, my son Nikhil was born. He came barreling into the world weighing a healthy 8lbs. I had a planned homebirth that was attended by my trusted midwife. Labour and delivery was everything they said it would be: loud, painful, exhilarating, slightly chaotic, and totally amazing.

I will never forget when the newborn screening (NBS) was done. The midwife came to the house and explained the process before poking the sole of Nikhil’s foot. That tiny prick on the heel looked so invasive at the time. And he cried and cried. How could a skinny newborn heel produce so much blood? If that was my heel, I thought, that prick would be comparatively massive. Of course, all babies in Ontario, Canada – where I live – have this performed shortly after birth. What began in 1965 with Phenylketonuria (PKU) screening, eventually expanded to include 29 diseases, all of which are now tested by Newborn Screening Ontario (NSO) in Ottawa’s Children’s Hospital of Eastern Ontario (CHEO). I quickly got over the excitement of the heel prick and passed it off as one of the many miniature heartbreaks that would accompany motherhood.

Remember those first few weeks of the newborn days? Me neither. It could have been days or a week, but I do remember getting the call. I was informed that my son had screened positive for 3-Methylcrotonyl-CoA Carboxylase (3-MCC) deficiency. They told me not to worry; that screening positive does not mean that the child is confirmed to have said disease. But, we would both have to report to the hospital for further blood and urine testing. As I always do when curious, I turned to Google and researched the heck out of 3-MCC and newborn screening in general. I learned that 3-MCC is an inherited condition that prevents the body from properly breaking down leucine, an amino acid. Leucine is present in many foods, and is commonly found in animal products, such as eggs, dairy, and meat. The malfunction or absence of the enzyme that breaks down leucine can lead to a buildup of toxic substances in the body and can result in issues with growth, health, and learning. This buildup can also create a metabolic crisis that, if left untreated, can cause seizures, brain damage, coma, and death. I knew that medical literature was nothing if not thorough, and was only slightly alarmed. This was just a positive screen, after all, not a diagnosis. After reading about symptoms and balancing probabilities, I decided that heading to the hospital for further testing was a mere inconvenience and that everything would check out normal, just as it had with our little two-vessel umbilical cord issue.

Let’s be honest: having to catch a urine sample from a newborn in a hospital washroom is not enjoyable. Neither is witnessing blood being drawn from his tiny, seemingly fatless arm. The truth is, I made my husband keep Nikhil company in the phlebotomy lab because I couldn’t bear to watch. What I didn’t completely understand at the time, however, was why I also had to provide the same samples. But I did. I just really needed to get the “all clear” from doctors so we could proceed with our normal lives. Our normal, crazy, exhausted lives with a newborn son.

When I was contacted by CHEO some time later, I got mixed news about our results. My son, thankfully, was negative for 3-MCC. I, on the other hand, tested positive. Were they sure? They assured me that they were. My son’s initial positive screen was transient; that is, it was a temporary state that resulted from my own blood presence in utero. The initial screen picked up my status, but enough time had passed by the second test for my son to rid himself of my blood. This was the reason for giving my own samples in the hospital that day. Since I had previously read about the metabolic condition in great detail, I was incredulous. I had never experienced any of the listed symptoms in a chronic sense during my childhood, such as irritability, extreme fatigue, vomiting, diarrhea, and hypotonia. My mother reported that as a baby, I had no issues feeding or growing, nor was I afflicted with major bouts of illness. In 1984, the year in which I was born, 3-MCC was not routinely screened for. It was not until 2006 that it was included in the Ontario-wide screening program. Though 3-MCC is estimated to occur in 1 in 50,000 births in Ontario alone, it is not known how many asymptomatic adults exist. We are out there – but most are ignorant to their conditions, understandably so in the male population.

Since learning this new information about myself, I had worried about potentially passing my disorder onto future children. Fortunately, 3-MCC is inherited in an autosomal recessive manner. I am not a carrier and, therefore, cannot pass it on to my children. Interestingly, I have followed a vegetarian diet for over 18 years, long before I learned of my disease. Whether or not this practice has kept me healthier than I otherwise would have been, we will never know.

When I was first approached to contribute to the Organic Acidemia Association newsletter, I struggled with a reason to do so. I have no symptoms with which to sympathize, no advice to give about navigating the health care system, and no tips in dealing with restrictive insurance company policies. The reality is that, were it not for my son, I would likely never have known about my 3-MCC. But, by connecting with others through the OAA, I have witnessed a community that fosters support amongst its members. I have comforted new mothers who are facing the uncertainty of a positive screen. If nothing else, I hope that my story provides some hope that having a metabolic condition does not necessarily mean that a lifetime of illness is ahead. The scores of unrecorded asymptomatic adults are reasons to believe that we are not living at the mercy of our genetics. It is my sincere hope that as more disorders are added to the newborn screen, we have a real opportunity to tailor treatment plans to individuals, adding quality to the lives of those with organic acidemias.

Are We There Yet? Propionic Acidemia Nutritional Guidelines