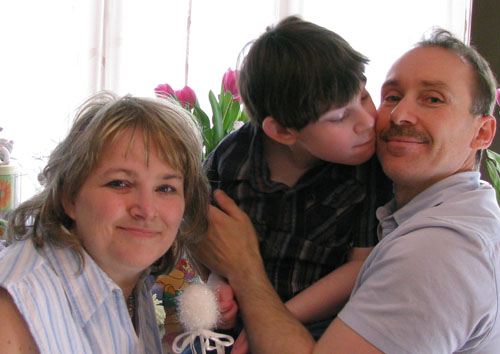 Let me tell you a little bit about our son, Marc-Antony, and our family.

We live in Moncton, New-Brunswick CANADA. Our son was born premature at 4 pounds 9oz on July 15, 2000.  He was having difficulties feeding, would vomit a lot and it took him 21 days to achieve the desired weight of 5 pds 2 oz; the required weight for the hospital to let him come home with us.  Once home, he would take 1 hour to eat 1 oz of formula. He was put on different formula over a period of 5 months and was treated with reflux medication; but nothing seemed to work until he was put on Alimentum, which he could tolerate better and would vomit less. We devoted ourselves to feed him. Making it the longest 5 months of our lives…he would gain a few pounds, but then loose it again. We knew something was wrong with our little boy, but no one was listening, our pediatrician commented that I was too stressed and suggested that I should consider going back to work and let nature take its course…

Finally, at our 6-month visit with our wonderful family doctor, Dr. Victor Robichaud, we begged him to do more testing on him. He did. Blood tests were done and were sent to the Maritime Medical Genetics Service at IWK Grace Health Centre for Children, Women & Families in Halifax, Nova Scotia – Canada.

The blood tests revealed extremely high amounts of homocysteine in his blood (147). They also found high levels of methylmalonic acid in his urine.  When methylmalonic acid and homocysteine are found in a child’s urine, there is a problem in the way that child uses vitamin B12 (cobalamin). Children can either have low B12 levels or there can be a problem in the way the body converts the B12 into a usable form. Marc-Antony’s vitamin B12 level was 1400, which was elevated; therefore, Marc-Antony was not was not B12 deficient.

He was admitted the same week for further metabolic investigation.  It was at that time that Dr. Sarah Dyack, Medical Geneticist, suspected that he had an “inborn error” in the metabolism of cobalamin.

Marc-Antony is not able to convert the B12 he absorbs from his food into the form of B12 that is required for the body to grow and develop properly. He was started immediately on daily intramuscular injections of Hydroxycobalamin (which is a special form of Vitamin B12 that Marc-Antony can use). They did a skin graft which took several months for the results, but it did confirmed Dr. Dyack’s suspicion; that he had a rare inherited metabolic disorder called Cobalamin-C deficiency.

This is when our journey began!  Since then, we have changed Pediatrician and I trust more my natural instinct as a mother.

Marc-Antony was 9 months when he had surgery to put in a feeding tube (g-tube) because he was loosing much more weight than he was gaining. He was still vomiting and was hard to feed; this was the best decision for Marc-Antony and for us. Still to this day, his least favorite thing in the world is eating. He was tube fed until 2 1/2 years old. In the meantime, we never gave up trying to feed him by mouth. Finally, his stomach grew and over time he could tolerate some formula without gagging and vomiting. Today, we use mostly his g-tube for his medications but we also use it a lot when he’s sick with a typical cold and refuses to eat by mouth. He is allergic to milk protein; therefore he takes a special formula called EleCare Vanilla that he loves. He started having seizures when he was 3 years old. He had 3 major seizures since, but is now under control with seizure medication.

As a result of this disorder, Marc-Antony has cognitive and physical difficulties, including feeding problem, seizure disorder, developmental delay, and visual problems. Also, his high levels of homocysteine in the blood can damage the arteries and is associated with heart disease (stroke). The developmental outcomes for infantile onset of cobalamin-C Deficiency is poor and the severe deficiency during fetal development cannot be reversed.

Last year, I have joined “on-line” the Organic Acidemia Association (at OAANews@aol.com)and got in touch with wonderful families dealing with MMA (methylmalonic acidemia disorders). So far, I have noticed at least 15 children dealing with Cobalamin-C Deficiency. This is pretty wonderful considering there are only about 200 known cases around the world.

Despite all of this, Marc-Antony is now a happy 7 years old (almost 8 in July-2008). Since there is no special education school in New-Brunswick, all the special needs kids are integrated with regular kids. He has a full-time interventionist with him. He is also followed by a team of specialists (physiotherapist, occupational therapist, speech therapist).

To this day he is non-verbal, but he shouts, squeals, smiles, laughs out loud, and cries. He’s quite an emotional little guy who likes to snuggle real close before falling asleep. He loves to be tickled, he will stand in front of us, and lift his neck and will wait until we tickle him (especially with his dad), so cute. He is a “daddy’s little boy” for sure! He comes to us when he wants something and grabs our hands and brings us to what he wants. He is crazy in LOVE with the Teletubbies! He started walking on his own in August 2007 at the age of 7!!! Now that he walks, it’s a whole new world for him to explore and he keeps us busy running after him.

It’s hard to accept when your child is different, you mourned the “healthy” child that every parent wants… but now “different” in our family has become “normal” for us.

In the beginning, we wanted to know as much as possible about this disorder, would he be able to talk, walk, study, and be an independent adult?  But as the years go by while you do everything to help your child achieve these goals (stimulation, therapies, etc.); you learn to let go a bit and accept your child for who he is. We are accepting Marc-Antony as the child he was meant to be, and HE IS perfect just the way HE IS!!