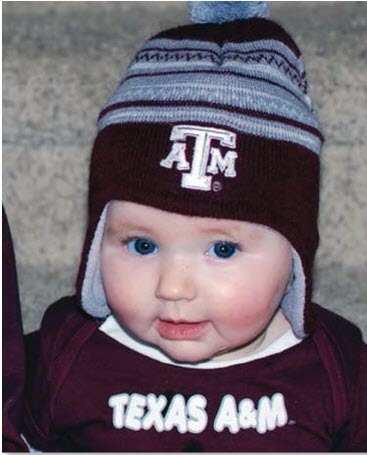 On June 27th 2012, Maggie Grace was born, the only little girl on both sides of our family. With her unexpected red hair and bright blue eyes, she was the most beautiful girl I had ever seen.

The day after she was born was perfect. Friends and family came to the hospital and cuddled her for hours without her making a fuss. Not even her super-excited three-year-old brother could coerce a cry from her. At the time, we thought she was simply a very easy-going baby. My only nagging concern was that she wouldn’t nurse. Experts marched in and out of the room during every feeding with limited success, but told me to keep practicing and that she would soon catch on.

Day three was when everything changed. Since Maggie had been so mellow the day before, my husband Chris left the hospital to run some errands. The nurse came in to take Maggie so I could shower and eat. She commented on how Maggie felt a little cold, but did not express any concern. The morning came and went. I finally called the desk to remind them that it was time to feed the baby, and they told me she had been taken to the NICU. I dropped the phone and started down the hallway as fast as I could go. My cell phone was in my pocket, and I called Chris to tell him that when he finished with what he was doing he needed to come on back to the hospital. What he heard was hysterical crying and gulping with no intelligible words at all.

At first they thought she might have some kind of infection. A close friend who happens to be a pediatrician called me often so she could help interpret the tests they were doing. It sounded routine. I kept thinking that anytime Maggie would start to improve, and we could take her home. But she wasn’t responding to the treatment. Her temperature was too low; she wouldn’t eat and wouldn’t stay awake. We watched our cherub-like angel shrivel into a little grey sickly looking baby, and there wasn’t anything anyone could do about it. Based on some of the testing, the neonatal pediatrician began to suspect that Maggie was suffering from some sort of metabolic disorder and recommended we move her to Children’s Medical Center. She had been so kind and caring with us, I could hardly believe she was the same woman I heard barking to someone on the phone about rushing Maggie’s newborn screening results.

The next couple days were a blur as we waited on the newborn screening results. Endless experts and specialists flowed through the hospital room offering opinions and explanations. Wonderful nurses offered comfort. I lost more than 20 lbs. while I watched Maggie waste away. We couldn’t hold her because of the IV in her belly button, but we stayed with her in the room when allowed and slept in the visitors’ area when the doctors were with her. When the newborn screening results came back, the attending physician met with us and explained the diagnosis. He told us Maggie had a rare genetic disease called Isovaleric Acidemia and explained how the disease prevented her from processing leucine protein. The disease is very manageable and, once treatment started, Maggie began to improve immediately. When she cried, the nurse tried to shush her, but it was music to my ears since she previously had been too weak to cry.

She came home July 11 and, as of today, she continues to thrive. Her disease is managed by a strict diet that allows a limited amount of leucine protein. She shows absolutely none of the negative side effects many children suffer when they go into metabolic crisis.

Maggie is almost 7 months old now and growing like crazy. At her six-month, well-baby visit, she was in the 80th percentile for height and weight. She is a very happy baby and loves interacting with people.

While most babies would have started solid food already, IVA babies start solids a little later. We go in for lab work every week so they can monitor her leucine levels. She has had plain rice cereal a couple of times, but we have to wait to hear what our doctor has to say about the latest lab results before she can try anything else. The biggest challenge so far has been educating our family! Maggie is a seventh generation Texas princess. We Texans like our BBQ so our family is having a hard time understanding that Maggie can’t have things like that.

Despite having to do things a bit differently from other babies, Maggie is in excellent health and that can be credited 100% to the newborn screening that allowed for early treatment. We are eternally grateful for every day we have with our baby girl.

From the March 2013 OAA Newsletter