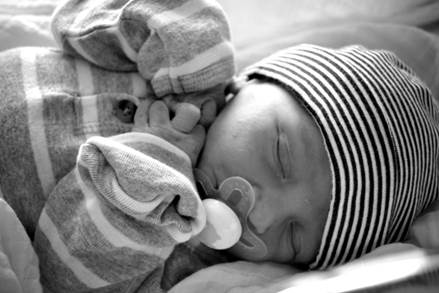 May Day 2014 was one of the most exciting days of my life.  I was exactly one week overdue with my second child.  We had a 22-month old daughter and were anxiously awaiting the arrival of our little boy to complete our perfect family.  Our daughter Claire had been born early, and I was so excited that this time around I wouldn’t have the stress of caring for a small baby.  All I could think of was how chubby he would be when I finally got to see him.  After a smooth labor and delivery, my Grady David was here.  He had 10 fingers, 10 toes, breathing, strong heart beat, but he was small; not what I expected for an overdue baby.

The first couple days of life with Grady were so smooth.  He nursed great, slept normal, and was mild tempered.  His sister loved him already, and we felt blessed.  Due to him being jaundice, I was instructed to nurse every 3 hours and then offer a bottle after each feeding to make sure he was getting enough fluids.  Each feeding he nursed fine, but barely drank from the bottle.  On day 4 of life he would start to nurse and fall asleep before finishing his feeding.  Towards the end of the day, he would cry out of hunger, start nursing, and then immediately break his latch.  The following day I dropped my daughter at daycare and went to my parents’ house to let 5-day-old Grady sleep in front of their big windows to help with the jaundice.  My cell phone alarm woke me from a nap to feed Grady, but before I could start our family doctor called.  She asked how Grady was.  I told her I was actually thinking about calling her that day because he was very sleepy and breaking his latch.  Without responding to me, she started speaking to someone on another line, repeating my words.  She instructed me to have someone drive us directly to NICU in Madison, and to feed him in the car.  She said his newborn screen showed the presence of organic acids, and he needed to be seen by a metabolic specialist immediately.

Grady was admitted into the NICU for a 7-day stay where he started treatment.  He was having trouble regulating his temperature and had some irregular breathing patterns.  He continued to eat while there and eventually started nursing again.  Grady was diagnosed with Methylmalonic Acidemia, and shortly after confirmed as being Cobalamin C.  During his stay, we saw our first physical therapist where we heard the term “floppy”.  He was arching constantly during those early days as well, and could almost roll on his own.  We learned this was from his muscle imbalance and low muscle tone.  He also had an MRI while in the NICU, which was normal.

Through the course of the next couple months we met with and developed Grady’s medical team and learned more about his disease and how it was affecting him.  Looking back to my pregnancy, it was obvious he was being affected in utero.  At 33 weeks my doctor first started noticing slow growth.  This trend continued, but multiple ultrasounds convinced us he was growing and healthy.    Within the first couple months we met his cardiologist, who diagnosed Grady with cardiomyopathy.  At the same time Grady’s heart rate was elevated, likely compensating for the lower function.  Now, at 18 months, he has been given a clear cardiology report and his heart is functioning normal.  His neurologist continues to monitor him, but feels he is developing normally.  Vision issues are one of the most common, and devastating, effects of having Cobalamin C.  He started seeing an ophthalmologist regularly monitor the health of his eyes.  He has never shown any signs of nystagmus or strabismus, but does have retinal irregularities.  Visually Evoked Potential (VEP) tests confirm lessened vision in his left eye, where the maculopathy is more pronounced.  Although he has these vision issues, he plays, eats, and explores like a child that can see perfectly fine.

While we have since day one been very happy with Grady’s medical team, we felt something was missing in his treatment.  He was extremely responsive to B12 early on.  As he grew, his oral medications (betaine, levocarnitine, leucovorin, and Metanx) increased dosage with weight, but the B12 remained the same.  As Grady gained weight, his levels started creeping up.  We requested to have his B12 increased to follow weight as well, even though it was not the recommended amount for his age.  Our geneticist agreed to see if it lowered his levels, which to our delight, it did.  Although we were happy with the results, we wanted more and continued searching for articles that would indicate it was an option.  When Grady was 3 ½ months old, a mom joined the Facebook support page and private messaged me about her son, just diagnosed with CblC.  Through conversation with her I found out her son was on a very high dose of B12.  Our doctor reached out to their geneticist to learn more about it.  At 5 months old, Grady started the higher dose of B12 and his levels dropped almost in half.  He had so much more energy and was overall much healthier. ​

I truly believe my son is the thriving, wild, little boy he is today because of the networking we found through online support groups and our geneticist’s openness to try new treatment.  With rare disease, our role as parents is to be a researcher and figure out how we can help our children.  Along with medicine, we found that therapies were very beneficial.  Grady seemed to have tightness and pain as an infant from his muscle imbalance.  Weekly trips to the chiropractor for pressure point therapy helped him sleep more comfortably and perform better in physical therapy.  Grady has met all this major milestones, with physical therapy as a major contributor.  By networking with other moms, I learned feeding techniques (thickening milk) that made drinking bottles easier for Grady.  Although we didn’t have one, a speech therapist would have been helpful for feeding issues.  I also highly recommend parents seek a case worker through their insurance company if possible.  Dealing with insurance can be a full time job, and our case worker now deals with all the hassle for us and makes sure all of the requests are run through smoothly. ​

My most important advice I can give a parent new to this world is to find support.  We have been blessed with an amazing family, who at the drop of a hat, helps in any way possible.  Teaching our family about medications and care helped us not feel trapped by the disease.  Online support networks have been my saving grace in so many ways.  I have found my best friends through Facebook, whose children also have CblC.  It’s an instant bond that can get you through the worst.  For anyone in need of support, feel free to call, email, or text me any time.

When I think back to Grady’s diagnosis, I was heartbroken that he would miss out on all the dreams I had for him.  Now, at a year and half, I see he’s not missing a beat.  Life has its bumps, but he is going to do everything I dreamt for him, in his own way.  I am in awe of my little man every day and all he brought to my life in 18 short months. ​

From the Winter 2015 OAA Newsletter