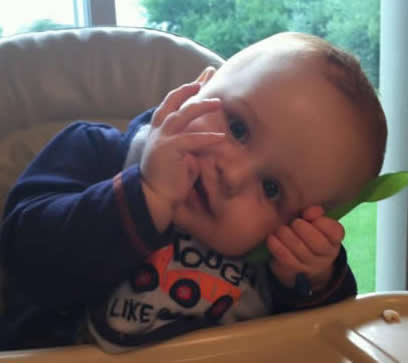 Dylan Matthew was born on October 12th, 2013 in Waconia, Minnesota, weighing in at 8 pounds, 2 ounces.  After Dylan was born, the doctors noticed that he had a lower than average body temperature, so they brought him back to the nursery to warm him up.  He was brought back to us, and from there on out for two days, we experienced a normal, healthy little boy, or so we thought.

In the early morning hours on October 15th, only 15 hours since we had been discharged from the hospital as a family of 3, Dylan was acting kind of strange.  He was very sleepy, and seemed cold to the touch.  My husband, Adam, and I took his temperature and he was at 95 degrees.  Knowing that wasn’t normal, I called my sister- in- law, who is a NICU nurse here in the cities, and she told us to try doing skin-on-skin to warm him up, and if that didn’t work, to probably call the on-call pediatrician.  Much to our dismay, an hour passed and he hadn’t warmed up at all, even after everything we had tried.

From the Fall 2014 OAA Newsletter