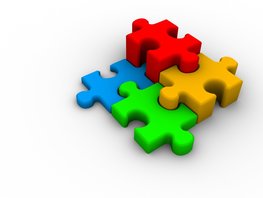 This essay is based on a talk I intended to give at the 2016 FOD-OAA meeting in Denver.  It is based on my own observations and those of Dr. Richard Frye, MD, PhD, who directs our Autism Specialty Clinic. In this clinic we see patients diagnosed with autism and attempt to understand the metabolic/biochemical abnormalities that are present in these patients.  Using this approach we then implement treatments designed to improve the underlying biochemical abnormalities, and thereby lessen the autism symptoms.  Dr. Frye also directs a research laboratory devoted to studying mitochondrial dysfunction in patients with autism.
Autism is now familiar to most Americans, thanks to increased awareness, increased recognition, and what appears to be increasing prevalence.  It is a description of how someone’s behavior appears to us, not a specific condition with a single cause, or even a specific condition with several possible causes.  The fundamental characteristics of what is called autism include problems with communication, problems with relationships with others, and restricted interests and repetitive behaviors, including insistence on sameness.  The onset must be in young childhood or earlier.

Within the broad definition of autism, or what some call “the autisms”, are a variety of related conditions, which have less severe problems, that help to make up the “autism spectrum disorders”.  In Asperger syndrome communication is good; in PDD-NOS (pervasive developmental disorder-not otherwise specified) there is less restriction of interests, and less repetitive behaviors.  The onset may be sudden, often accompanied by a febrile event; or the symptoms may appear gradually.

The fact that there are families with more than one child with autism, and families in which different members may have different forms of the autism spectrum disorders, suggests that there is a genetic contribution to the autism spectrum. Autistic symptoms are associated with changes (mutations) in a large number of specific genes, and regions of chromosomes, or additional entire chromosomes.

Finally, many children with autism have disturbed intestinal function, with slow intestinal transit and abnormal bowel movements (too runny or too firm).  Many children have distinct food aversions, or extremely strong preferences, so that meals are one more example of repetitive behavior.

Among the genes and genetic disorders that can be associated with autism are Rett syndrome, Williams syndrome, tuberous sclerosis, Down syndrome, abnormalities of small genetic regions, and abnormalities of a large number of genes associated with brain function, especially genes involved in the formation of synapses (the areas where two nerve cells make a connection—there are billions in a human brain), and genes involved in certain biochemical processes.

Some of the specific genes contribute to processes to create or transport certain molecules in brain cells (neurons) (for example, creatine), to inactivate excess amounts certain harmful molecules that we make or ingest (e.g., ammonia, phenylalanine), and to provide the energy necessary for proper functioning of neurons (the processes that take place in the mitochondria).

Some of the chemical compounds that contribute to autism in some children are propionic acid and its variations.  We all make a lot of propionic acid, generally in the form called propionyl-CoA, and we absorb a very large amount, made by our gut microbes (the “gut flora”), which should be processed in the liver to less dangerous substances, and used for energy.  It has been known for a few decades that propionic acid and related compounds can interfere with brain function, and that laboratory animals exposed to an increased amount of propionic acid can exhibit autism-like behavior—restricted repertory of interests, poor interaction with other animals, and poor communication/vocalizations.  This sounds similar to what sometimes happens to children with propionic acidemia, in which propionate accumulates because of genetic alterations in body chemistry (metabolism).  There is growing evidence that some children with autism may be being exposed to, or are inadequately responding to, high levels of propionic acid made in the gut. The obvious question is would the autism relent if the propionic acid burden was lower?

So we investigate children with autism by looking for abnormalities in a wide variety of body compounds (metabolites), analyze their genes for extra, missing, or altered regions, consider if there are dietary habits and intestinal problems that might be contributing, and consider the role of oxidative stress.  We can’t change a patient’s genes, but we may be able to repair some of the problems caused by gene mutations, and we can certainly try to improve abnormal metabolic processes.

One of the early discoveries about metabolism in children with autism is excessive oxidative stress.  This is a quick way of saying there is evidence of damage to tissues due to oxygen.  Oxygen is essential for life, but it is also a toxic substance that can damage our tissues. This is similar to what happens in a car—oxygen is essential for burning the fuel (gasoline), but it also damages the car—causing rust spots on metal, causing plastic to change and become brittle.  We can measure oxidative stress by looking for increased levels of molecules damaged by oxygen.  Damaged amino acids, fatty acids, and nucleic acids (the building blocks of DNA, our genetic material) are found in a significant number of children with autism.  The connection between this damage and the autistic behavior isn’t clear yet—it’s very much like your car not running perfectly, finding rust spots on the bumper, and wondering if there is a connection.

Glutathione is our main anti-oxidant.  Many children with autism have inadequate free glutathione. There are ways to improve the situation, and lessen the autism symptoms.  Large doses of vitamin B12 (even though the blood level is normal), and N-acetylcysteine (a precursor of glutathione) can be helpful.

Mitochondrial dysfunction in the brain can cause subtle and regional problems, or overwhelming brain damage, seizures and coma.  In the muscles there may be weakness or hypotonia.  When we find this in a child with autism we are especially likely to investigate mitochondrial function by measuring lactic acid (increased level means mitochondrial impairment), and related substances.  Mitochondrial problems sometimes respond to certain common nutrients that we can give.  These are collectively called “the mitochondrial cocktail”.  There are several versions, generally including at a minimum carnitine, riboflavin (vitamin B2), coenzyme Q10 (co-Q), and thiamine (vitamin B1).  Like children with primary mitochondrial problems, autistic children with impaired mitochondrial function may benefit from treatments that address this.

Altered immune function is another common aspect in some children with autism.  This may be expressed as abnormal intestinal immunity, inflammation, abnormal bowel movements, and intolerance of certain foods because of altered digestion or excessive absorption of toxic substances derived from foods.  The foods most commonly involved in this process are proteins present/derived from milk (casein) and wheat (gluten/gliaden).   Eliminating these foods from the diet may dramatically improve brain function and lessen autism symptoms.  The gut flora includes several hundred different sorts of microbes, all interacting in ways we are barely beginning to understand.  If there is excess production of propionate or inability to deal with it, an antibiotic such as metronidazole (Flagyl) may change the numbers of certain microbes, and lessen the production of propionate.

Deficiency of certain nutrients in the brain may also occur.  This especially includes the vitamins folic acid and tetrahydrobiopterin, which will lead to altered levels of neurotransmitters, the substances that neurons use to communicate with each other.  Serotonin is the neurotransmitter most conspicuously altered in autism (and also depression)—using a low dose of a selective serotonin reuptake inhibitor (SSRI) such as fluoxetine (Prozac) prolongs the action of serotonin, and can lessen symptoms.  95% of the serotonin in the body is made in the intestine, so drugs which influence the bowel may affect serotonin levels.

All of these observations and ideas can be part of understanding autism even in a child who already has a “cause” for autism—Down syndrome, Rett syndrome, propionic acidemia, Angelman syndrome, etc.   Of the disorders of most concern to the FOD Family Support Group and the Organic Acidemia Association, for whom I first developed these thoughts, the organic acidemia patients are the more likely to have autistic features.  Autism doesn’t occur in every patient with propionic acidemia, however, so we must be aware of what other factors might be contributing, and can we improve the situation.  Some children with autism with or without a named metabolic error will have a significant improvement if they are only IV feeds (total parenteral nutrition, TPN) for a while.  This tells us that something about food or the gut flora is playing a role.  Other patients will have a major improvement during and shortly after an illness with fever.  A new drug, sulforaphane, derived from broccoli sprouts, may benefit them (and perhaps others) greatly.

To summarize:  Autism is a collection of symptoms, not a specific entity, that occurs in a variety of settings; there are numerous nameable genetic “causes” of autism; autism is a systemic disorder which affects the brain as well as other organs; there are numerous biochemical/metabolic problems which can be found in various combinations in children with autism; these problems may be treatable by diet, nutritional support, medications; autism may occur in children with metabolic disorders, especially some of the organic acidemias; treatments that help improve the metabolic situation may improve the autism symptoms as well; and we must keep in mind that if we can’t explain and treat all the symptoms of a patient we may be overlooking something that could offer additional benefit.